As you determine where to spend your hard earned monies this holiday season, might I suggest these fine establishments?

If you want to support HijiNKS ENSUE for the holidays, but hate capitalism then perhaps you would enjoy GIVING A DONATION or purchasing sometime on my Amazon Wishlist? All of those ideas sound terrible? Then how about a digital highfive via Twitter or email? 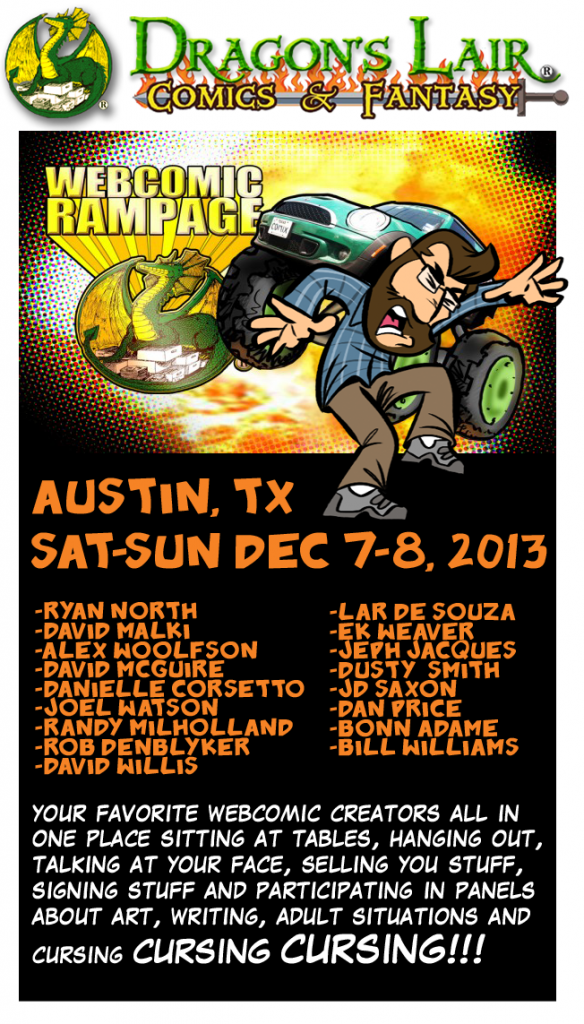 [Writing this on Friday 12/6/13: Due to a freak ice storm in Dallas, I had to move up my travel plans to go to Austin by a day and in the process lost two days of drawing time. Please enjoy this rough sketch version of the comic. I’ll ink and color it this weekend and re-upload]

[Update 12/7/13: Hey, it’s the finished comic! Super-refresh real hard if you don’t see it. The sketchy version is saved over on my Tumblr.]

My wife and I took our daughter to her first convention (in costume as Raven from Teen Titans) a few weeks back. It was important to me that she see the insane shrine to creativity and capitalism that pulls me away a dozen or so times a year first hand. I didn’t like that she knew I went away for 4 or 5 days a month to something called a “convention” but really had no concept of what that meant. It was a spectacle and certainly too much for her to take in (“MAN! My Little Pony is REALLY popular here!” she commented.), but at least now she can picture in her head the nerd Bacchanalia that I am consumed by when I’m away.

COMMENTERS: Can you remember a time as a child when you were brought to a place or event and simply awestruck by the size, grandeur, insanity or horror of it all? Did you ever go back as an adult? How did it compare?

Oh yeah, all the time, the event was called “church” and we went all the time when I was a kid but then when I grew up and went back it was just really, really creepy.
Block IPDelete
Reply

Aw man, you beat me to it! We were Jehovah’s Witnesses when I was a kid, so we went to church 3 or 4 times a week, plus these giant conventions a couple of times a year! It felt like a punishment, and the level of commitment people had just blew my young mind. I stopped going as soon as I moved out on my own, but I went back a few years later for a memorial service, and it was just… weird. I discovered I am not the church type, to say the least!
Block IPDelete
Reply

The synagogue I grew up in was all about community and basically a social thing, so now that I’ve grown up and moved and such going to services feels really weird. They may be awesome people but they’re not MY community, and it’s hard to shake that expectation even when you know it’s silly.
Block IPDelete
Reply

Am I the only one who still goes to church by choice?
Block IPDelete
Reply

We went to Vegas one year when I was a kid. My parents won holiday concert tickets. We watched all the cool free shows like the pirate battle at treasure island and statues at Caesar’s Palace. We also went and had dinner at the Excalibur and watched jousting. I thought is was really cool, but going back as an adult (who doesn’t care much for gambling or strippers) I was disappointed (by all the gambling and strippers) Se La Vi`.-Zach
Block IPDelete
Reply

Vegas is a good one, we went there every xmas when i was a kid – Gramma liked the penny slots. But the first thing that popped into my head was DismalLand. You know, the Tragic Kingdom? Loved it as a kid, now my kids love it and I hate it. Too crowded, too expensive. Plus, my brain doesn’t like being rattled around inside my skull by rollercoasters anymore now that I’m old. (Does 43 years qualify me to be yelling “Get off my lawn!”?)
Block IPDelete
Reply

When I was a lad, I think of 10, my dad took me and my brother to this car show at the Cow Palace in San Francisco. So many weird looking cars! All shiny and new and totally-never-been used on the road. But the real treat was getting to meet none other than Ed “Big Daddy” Roth! He drew us a Ratfink on a shirt we still have (framed of course), and yes, he was wearing the hat!
Block IPDelete
Reply

You should save the sketch version! While the finished products look great, it is fascinating to see “how it’s made”. Keep up the great work!
Block IPDelete
Reply

Reminds me of when I was a kid and dad took me to drag racing and monster truck / tractor pulls.. didn’t realize then what a bunch of <insert stereotypical cliche of your choice here> it was full of.. did not wish to be associated with/by them
Block IPDelete
Reply

Probably going to Disney World (Florida) as a not-too-youngish kid on a summer family vacation, then going to Disney Land (California) when in college (perhaps twice, once without family), and a couple of times to Tokyo Disney Land as an adult with kid/kids. Except for the lines and the schmaltz it’s always been a fun time, although enjoyed a little differently from a grownup’s perspective.
Block IPDelete
Reply

Steampunk Fionna? Is this a thing? 😮
Block IPDelete
Reply

I went to Star Trek cons at a very young age, but I wasn’t totally blown away by it. I had been going to rock concerts since before I can remember, and when events escape the edge of perception, it stretches your mind like nothing else. Or maybe it was the haze of pot, tobacco and heroin smoke.Also, cookies in stick form is something I miss. No hassle of fitting it in a mug of cocoa!
Block IPDelete
Reply

My uncle took me to GenCon the year before they moved from Milwaukee to Indianapolis. There was all sorts of sharp, geeky stuff, and there was sci-fi that wasn’t Star Wars or Star Trek (I was sheltered in Junior High in 2002…). I haven’t been to their shiny new city yet, but I want to, just as soon as I stop spending my summers unemployed with student loans hanging over me like a monthly trio of swords of Damocles…
Block IPDelete
Reply

How DARE you invite people to remember ANYTHING about Attack of the Clones?!…This has really put a damper on our relationship, Joel.
Block IPDelete
Reply

P.S. Your family might be the coolest family.
Block IPDelete
Reply

A couple of years after Jurassic Park came out (so I would have been 11-12 or so) dad ditched work and we ditched school to drive to Albuquerque for a technology expo. The keynote presentation was about the CG that went into JP (remember this was a Big Deal back when the movie came out) and it was absolutely worth the trip, but the rest of the expo was totally over my head. I could tell it was interesting stuff, but it was not interesting stuff aimed at being digested by kids.
Block IPDelete
Reply

My parents took me to the local Renaissance festival the year it opened and I was immediately hooked on all things medieval and renaissance. Somehow though, I didn’t go back for almost seven years. When I did go back, it was to audition for a job.
Block IPDelete
Reply

The Vatican. Whether a card carrying member of the church or a dirty heathen like me, I defy anyone to step in and not be moved by the breathtaking artistry of the works and architecture therein, with the understanding that, somehow, *humans* made this.
Block IPDelete
Reply

When I was probably 8 or 9 and my Dad took me to Fenway Park for the first time. Walking up the ramp, coming up into the stands and seeing the whole stadium open up in front of me. Grandeur galore!
Block IPDelete
Reply

a grateful dead concert at 14. It was at a football stadium in Vegas. I got a contact high and fell asleep on the lawn to drums and space. No one harassed the cute sleeping underage girl.
Block IPDelete
Reply

I like these arcs. I keep waiting to see a strip where someone whose been too jaded by the abuses of decisions finally sees something that rekindles their faith to come back to geekdom and a welcoming arm is offered and someone says “Welcome home”. It’s beautiful. And also a very positive message your sending your daughter. Just prepare her for the few geeks that war over whose series is better. Not all of geekdom is love and friendship after all.
Block IPDelete
Reply