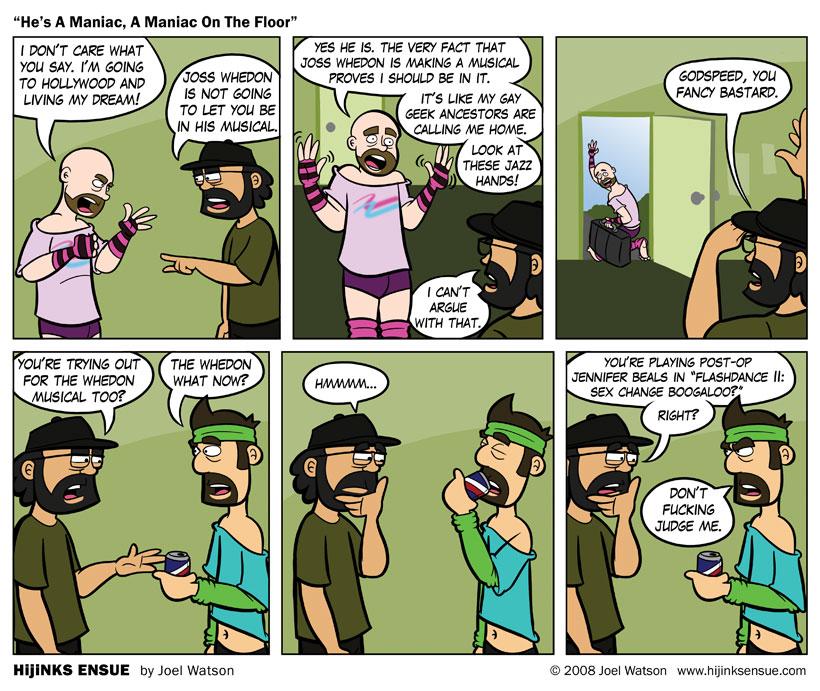 His followers (of which I certainly am one) are quite devoted. I can only assume that all 7 season’s of “Buffy” were laden with subliminal messages that will allow Joss to activate us in his time of need. Look out world. If a zombie-like hoard of kids with ironic tee shirts and even more ironic haircuts come lumbering at you, GET OUT OF THEY WAY! It could only mean Joss Whedon is in trouble and rest assured they will kill you to get to him. They might eat you. Depends on what kind of suggestion he implanted.

So anyway, say we (the Whedon Zombie Hoard) are called and we march to his rescue from… an IRS audit or something. Does he say the secret Mandarin Chinese word and deactivate us like so much River Tam, or does he keep as his personal militia of devout killing machines?  I, for one, would gladly live out my days as one of his elite death squad. Why do I assume Whedon has so many enemies?

Based on Joel’s wardrobe and Denise’s comment, what guilty pleasures do you indulge in. Mine is typically watching TV shows I hate until they are cancelled. It’s like once I start something I have to see it through to the end despite loathing ever god forsaken minute of it. Past and current offenders include “Dawson’s Creek”(i know), “Enterprise,” and “Smallville.” I’ve come clean. What about you?

UPDATE: Whedon filmed in this guy’s personal super villain lair! He was a home owner from the show “Monster House” that had his home transformed into an evil dungeon. Everything about this story is the coolest thing I’ve ever heard.