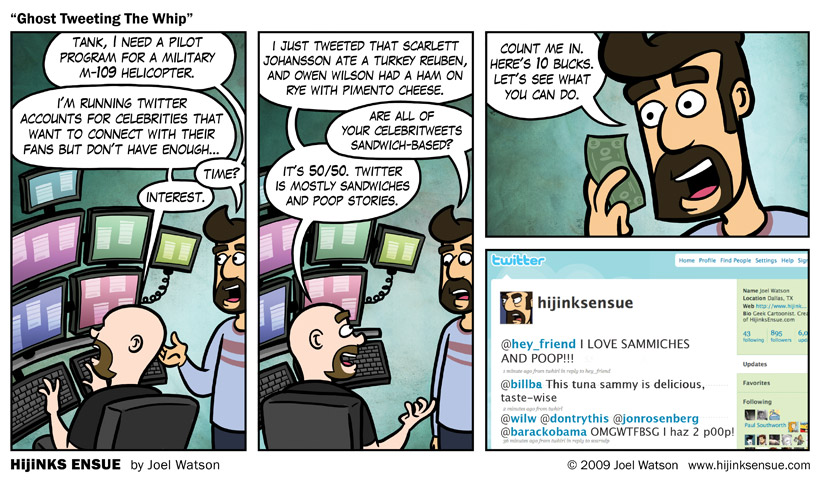 Twitter is my favorite social-interblog thing and typically the only one I actually use. There’s an undeniable simplicity to const 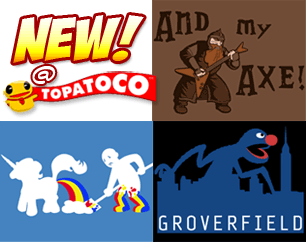 raining your posts to 140 characters. Twitter’s limitations are actually features as far as I’m concerned. When I used to rely heavily on LiveJournal and Pownce for my social netsploring I got bogged down trying to keep up with everyone’s page long updates and found myself not wanting to read any of it. Twitter forces you to self-edit and drill your update down to the most important details. It might be a sign of my diminishing attention span, but this is how I like to communicate. I hate small talk, and unnecessary details. Give me the gist, the meat, the car chase and the explosions.

I use Twitter to keep in touch with my friends far and wide, and to give my readers (you Fanciest of Bastards) a direct communication conduit to me. I find it cuts down on emails, and works better than AIM for short burst conversations. The other main appeal of Twitter for some is the opportunity to peak in on the lives of your favorite internet celebrities. I’ve mentioned before the odd voyeuristic quality of such actions, but as long as the Tweeter is genuine, I think it serves to strengthen the bond with their audience.

I guess it isn’t shocking that some celebs are paying others to “feaux-tweet” for them. I think they are missing the point, though. I know Twitter and other social media outlets are powerful marketing tools, but I would much rather follow @LevarBurton and read about his morning bagel than follow @britneyspears and read… well anything she (or her assistant) posts. As a matter of fact, if Britney Spears and Geordi LaForge’s half eaten bagel were both dangling off a cliff I would be more inclined the save the one with poppy seeds, a golden brown exterior and a garlic and herb schmear.

Do you use twitter? What for? What REAL celebritweets are you following? [I know I’ve asked this before but it’s been a while]