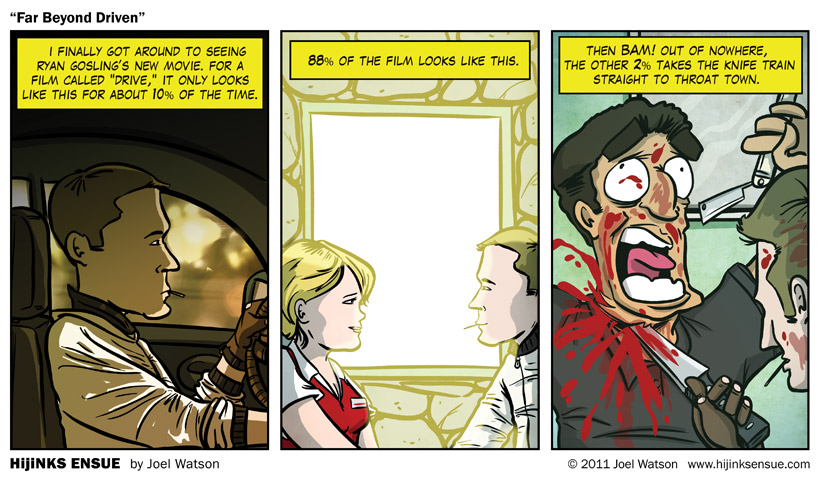 UPDATE: “Winter Is Coming” shirts are now IN THE STORE!!! [based on this comic]

On our rare kidless night off, I took my wife to see Drive. I was completely ready to write it off as as substituted-Statham drive/murder/fuck movie [hell, one of those words IS the title of the film], but the reviews I was seeing were surprisingly positive. Given the lack of other options in the cinema we gave took Drive for a test [PUN REDACTED]. I was quite surprised. A) Because they movie we saw and the movie that had been advertised had essentially NOTHING to do with each other. They seriously took the entire trailer from the first 15 minutes of the film which contains the only “anonymous crime driver for hire” sequence in the entire movie. And B) It was actually quite good.

Drive is a very slow, very thoughtful art house film. Not at all the ACTION-SPEED-MURDER-SEXcapade I had been lead to believe. Ryan Gosling has maybe six lines in the entire thing. I imagine 110 pages of his script just said “Ok, now look at her slyly, kinda bashfully, but also a little intimidating like you got something to hide.” The other 10 pages said “STAB THAT GUY IN THE NECK AND GET BATHED IN A FOUNTAIN OF HIS ARTERIAL BLOOD!!!” You see, that’s the other thing about Drive that made it… unique? You come in expecting bullets and blood in every scene, but instead you get a beautifully shot love story, sparse dialog, all at a relaxed pace. This serves to lull you into a false sense of calm, then SKLEEEESH! It’s knife time.

The violence in Drive is so unexpected, so infrequent and so brutal that you remember each and every act for a lot longer than you want to. The killings stick with you and keep you uncomfortable for at least as long as it takes to get to the next one. Only 5 or 6 people die in this movie and all of them do so in a spectacularly unsettling fashion. One death in particular still skeeves me out.

All of that said, I highly recommend it. Just know what you’re getting into.

STORE NEWS: The “Winter Is Coming” shirt should be in the store tonight or tomorrow. I’m excited.