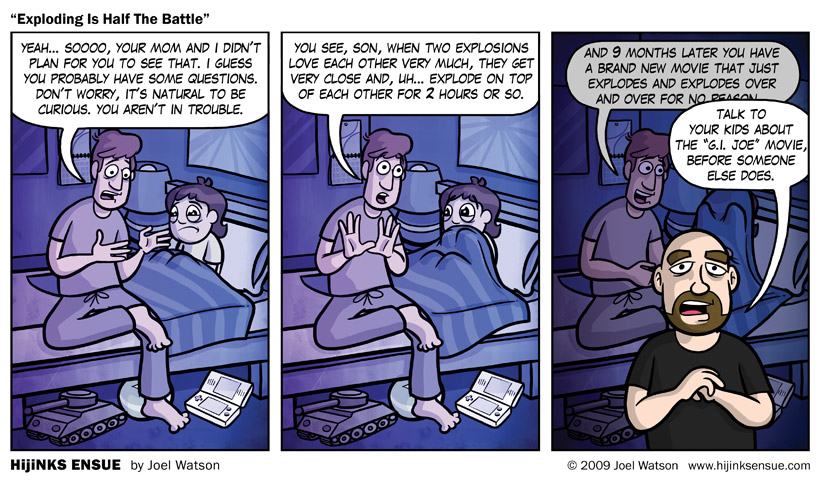 I’m really glad we saw G.I. Joe: The Rise of Cobra at the drive in theater. Otherwise I dont think we would have been as free to yell at the screen, huff exhaust fumes or reorient our chairs to watch other movies. We were on the very last row of cars, sandwiched between a hotboxing minivan (Josh didn’t mind at all) and a pickup full of red necks so the screen was quite far away and difficult to make out at times. We tried to emulate real theater sound (to hear the movie you tune a radio to a certain station) using Eli’s boombox for high’s, Josh’s subwoofer for lows and our own bemused groans for mids.

It was my first drive in experience and all told a very pleasant one despite the movie’s best efforts. Oh, the movie? Right. It was unfathomably terrible. I expected it to be bad, but I also expected to have at least some idea of what was going on at any given time during the film. I’m almost positive there was some dialog between explosions, in the same way one assumes people are all basically good. There’s a lot of evidence to the contrary, but you still want to hold onto that belief.

I have a feeling the shooting script for G.I Joe went something like this:

[Director’s Note: ok, the rest of the movie needs to take place underwater or on the north pole. Fuck it, let’s do both.]

[Director’s Note: Make sure we use “Yo Joe!” “Knowing is half the battle” “Kung Fu Grip” “Gotta catch’em all!” and “ThunderCats Ho!”]

Bottom line: Don’t go see it anywhere that shouts of outrage and uproarious laughter wouldn’t be appreciated. Wait for DVD. Hell, do a triple feature of ultimate confusion and explosions with G.I. Joe and both Transformers films. Make a real night out of it.

UPDATE ON THE BOOK PRESALE! As of this posting there are only 5 Ultimate Fancy Editions left!

I was live Tweeting during the movie from the drive in theater in Ennis, TX. The fruits of that effort are listed below: