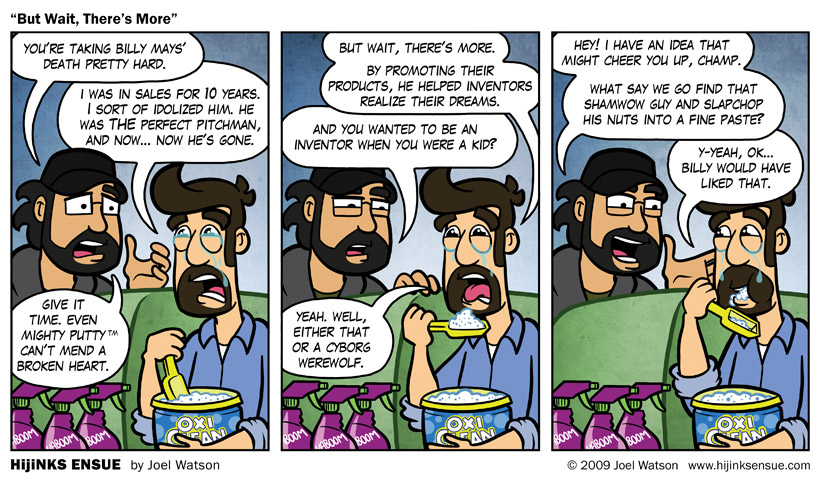 [reddit-me]Of all the recent celebrity deaths, the only one I’ve really cared about is Billy Mays. As the comic states, I was in sales for 10 years and I did fancy myself an inventor when I was younger. I have notebooks full of “inventions” that I hoped would one day be sold on TV or in stores. Both of these aspects of my past made me instantly respect Billy Mays. From a sales-guy perspective I recognize that he busted his ass traveling with trade shows to make a living for his family and eventually, through perseverance and perfecting his craft, he made it big. I appreciate the “self made man” entrepreneurial spirit that he epitomized. From a wannabe-inventor stand point, I have to praise him for giving average workshop and garage tinkerers like me the opportunity to bring their products to market and make their fortunes.

These sentiments might seem odd coming from me if  you only know me as a webcomic artist, but you can’t do a job for 10 years without learning to love it (or aspects of it) just a bit. That’s a side of me people don’t often see, but it’s there. I guess I feel like Billy and I were kindred spirits in that respect. Plus I tend to “project” when I talk, which he made into an art form.

I’ve really been enjoying his show “Pitchmen” on Discovery. I would assume the show’s future is uncertain at this point, but I encourage you to watch the first season to see what a kind and talented man Billy was.

If you have any warm thoughts to share about Billy Mays, I also encourage you to share them with his son, Billy Mays III on twitter at @youngbillymays. He’s obviously having one of the worst weeks of his life, but he’s been saying that the kind tweets from Billy’s fans are cheering him up.