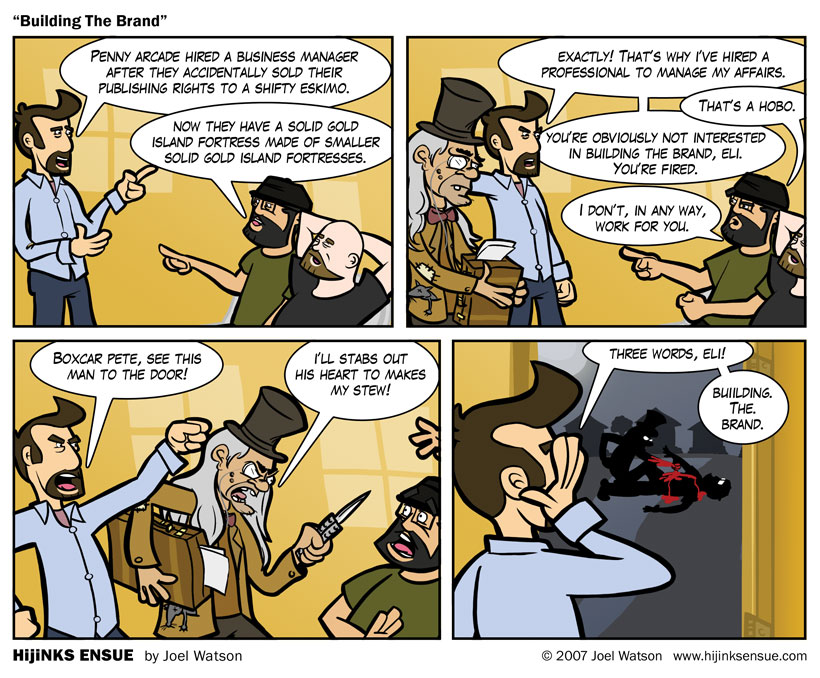 I read an article in Wired about the secret lives of Gabe and Tycho from Penny Arcade. It was eye opening to say the least. Penny Arcade is not a simple two man production whose sole focus is uploading jpegs and cracking wise. Oh no. Gabe and Tycho are merely figure heads that sit loftily atop a monolithic stone edifice overseeing a vast corporate empire. PA is a business. PA is a profit generating, self perpetuating turbine of lewd and lascivious 1’s and 0’s. I say this not to disparage, but to demonstrate my extreme reverence and awe.

Here are the Cliff’s notes:

Read the article. It was good. What a surreal and amazing experience the last few years must have been for those two.

Josh met Jerry and Mike a few years ago when they were working on a promotional piece for a game he and Eli were developing (and for which I did voice work). He said they are extremely cool guys and quite down to earth. I believe it. Their intentions seem to be pure and their motivations just. My one and only confusion stems from the fact that Tycho writes from time to time about not having money for this game or that peripheral… YOUR WEBCOMIC GENERATES OVER 1 MILLION DOLLARS A YEAR! Stop fucking with me.

Also, Also: On the subject of hoboes, you must download and listen to John Hodgman’s (PC from the Mac commercials and Daily Show correspondant) 700 hobo names. Its fabulous beyond repair. “Boxcar Aldous Huxley” is my favorite. It also features music from the fantastic Jonathan Coulton. When you are done you can visit the site with all 700 hobo names in illustration form.