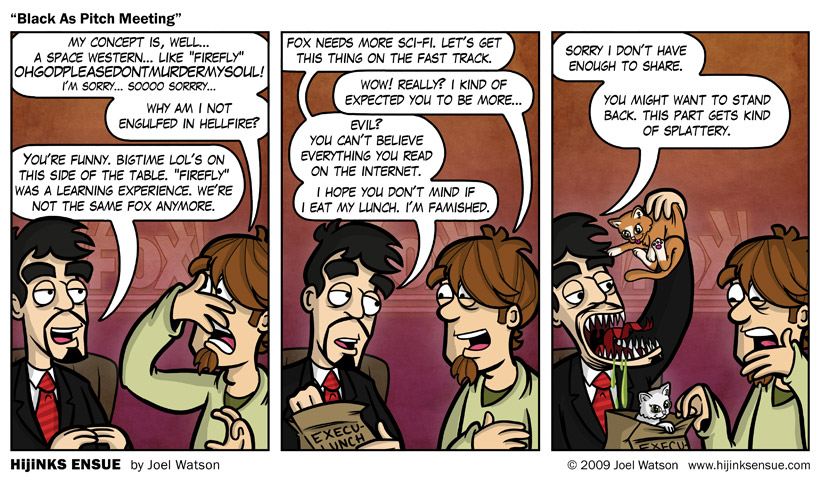 In all fairness to Fox, their proposed space western sounds more like a Jonah Hex ripoff than a Firefly/Serenity wannabe. Credit where credit is due, I suppose.

I love writing for the Evil Fox Exec. Despite appearing only a handful of times, I have his entire back story fleshed out in my head. He’s a troubled man that wrestles with the moral implications of his many unfathomable sins, while simultaneously reveling in his god-like powers. He wasn’t born this way. He was made into a monster. He’s a walking study in nature vs. nurture. He started at Fox in a lowly, but creative position. The highers ups noticed his go-getter attitude and began molding him to their sinister will. With each promotion came more money, more power and more dubious job duties. At first he was only asked to cancel shows that had already had several seasons, good promotion and still suffered from low ratings. He thought of it as mercy killing. Then he was told to create shows that would garner a small but devoted fanbase JUST so they could be canceled and replaced with reality-dance contests. Fox’s hate-engine is fueled by sadness and he was loading it’s doom-furnace one shovel full at a time.

OK, he’s basically Lindsey McDonald to Fox‘s Wolfram and Hart, but I still enjoy the tiny, evil space in my head the EFE occupies. Expect to see more of him in the future.