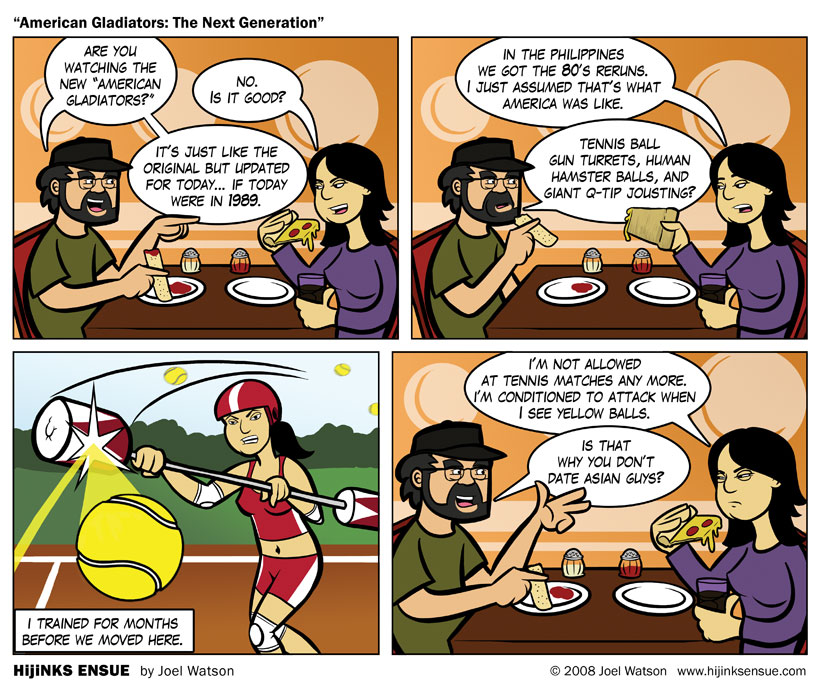 Snap! That’s right. A balls joke. That’s how I roll. I sent you on the balls-train to balls-town. I’m not ashamed. I usually don’t work blue… BALLS, that is! Double snap! In your face. What’re you gonna do? Nothing.

Over new years we were talking about the new American Gladiators revival power hour, or whatever, and Denise (that’s the girl in the comic, who oddly enough is the first REAL girl to appear in HE) said basically what you see in panel 2 up there. I loved the idea that the cultural ambassadors of late 80’s America to nations far and wide were Nitro, Laser and Diamond. There’s something beautiful about that. I wondered if she feared getting pummeled with sand bags at an American shopping mall or being forced to climb a rope ladder then ride a zip line to get to the bus stop. It would have been 10 times awesome if the audio and video signals got scrambled in the Philippines so that they saw American Gladiators and heard C-Span.

I had NO intention of watching the new American Gladiators until I realized that it had been infused with HULK-A-MANIA. Oh, brother, let me tell you, brother, that Hulk Hogan, brother, is one lumpy pile of orange man parts. He must sleep in a tanning bed for the same reasons Dracula sleeps in a coffin. They are both kept eternally young but develop complexion problems as a result.

A few things stood out from the 20 or so minutes I saw of the episode. First off, there was SO MUCH HULK-A-MANIA, brother! They could have toned it down to a moderate Hulkitiude and I would have been fine. God he freaks me out. You want to peel him, then zest his flesh over a salad. Anyway.

Secondly… TOYOTA FUCKING GIANT SUV-A-MANIA!!! They mentioned their sponsor just a few times. One of the tests was to run across an oil slicked glass bridge while Gladiators threw trucks at you. Everyone died.

Third thing: this guy comes back 14 years after having lost on the original show only to get his ass handed to him by some kid 10 years his junior. It’s SUPER SAD if your biggest regret, the demon that haunts you and prevents you from being a well adjusted person is your American Gladiators failure in 1994. Can you imagine? He lives a decade and a half in the shadow if this wretched event knowing that he can never be given a chance to redeem himself because the show simply no longer exists. 14 freaking years late they announce a new AmGlad (that’s the abbreviation I just made up), and reopen the wound (and offer new opportunities for sucking).