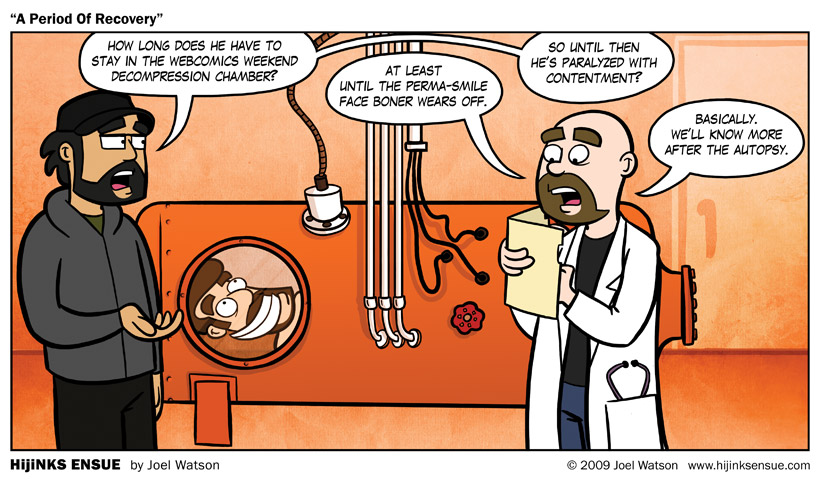 NOTE: COMICS WILL BE TUESDAY/THURSDAY THIS WEEK WHILE I “DECOMPRESS” FROM WEBCOMICS WEEKEND

I know I won’t be able to properly communicate how incredible the first New England Webcomics Weekend was, so I’ll simply try to recount a some of the events and people that made the weekend so special.

I landed in Connecticut around 1pm on Friday and the power of twitter brought me together with Chris and Jorge for a ride into Easthampton. Both very cool guys. I enjoyed the ride and hanging out with them the rest of the weekend.

Friday Night was the Pub Crawl. I met up with Randy Milholland, Danielle Corsetto and Angela Melick at my hotel and we hit the town. Randy (who ended up being a fellow Dallasite, ended up giving me rides all weekend for which I can not thank him enough) met up with some friends so the girls and I hit up a sushi joint called “Moshi Moshi.” We spent most of the evening at a bar called “The Tunnel” which was literally a tunnel turned night spot. There we met up with Kris Straub (who it turns out can shatter a cocktail glass with his mind) and virtually every other cartoonist on the planet (Kurtz, Kellet, Guigar, Barnes, Abominable, Sohmer et al). Make sure you check out Angela’s comic “Wasted Talent.” I watched her draw this one for most of the weekend, while she and I hung out. She’s a fantastic artist and excellent con-company (don’t hold it against her, but she’s also Canadian).

Around 1am I met up with Paperklip and went to Jeff and Holly Wigu’s house for a proposed BSG finale party. The torrent never finished so people drank and we played “Encore” (a music game where you have to sing songs with certain words or themes). Cartoonists in attendance that night were Jon Goatsenberg, Randall XKCD, Joey Softer World, Chris Yates (so drunk he thought I was a chair),  Ryansaurus Rex (I think he was there) and most of the rest of New England.

Saturday brought the first day of the show. I rode with my roommate T. Campbell. Very nice guy, though he stole my suitcase and is holding it hostage as I type (more on that later). The fan response on Saturday was overwhelming. They were like hungry webcomics piranha. I met even more great cartoonists (Octopus Mer, Diesel Stevens, Questionable Jacques, Anders Loves Renee, WonderMalki and Templar Spike to name a few). Saturday afternoon I got to kick off the “Livedrawing With a Cintiq” panel for a decent sized crowd. Based on audience suggestions I drew a dinosaur that hunts and kills unicorns and keeps their horns as trophies. He already had a knitting monkey helper on his back. KC Green, and Kurtz finished up the panel. Fans were coming up to me all weekend saying they loved the panel which really made me feel like a part of the “Webcomics Cool Kids Club.” I even got to do a few con-sketches (posted on Flickr) and conduct an interview on WW for Newsarama. I was also introduced to the concept of “Free Professional Massages for Cartoonists.” WTF, right? Where has this been until now?

Saturday night we had a cartoonists dinner party. Cartoonists likes their Chinese food. Randy took me back to the hotel around 10pm and I met my new roommate Krishna from PC Weenies. We had a lot in common as budding cartoonists and new fathers.

Sunday was much more low key. Many cartoonists were either dead tired, sold out of merch or on a plane home. I hung out backstage mostly having only had a few hours of sleep until the closing awards ceremony. Guys, do yourselves a favor and check out the video bumpers Dishliquid (yes, that’s Fancy Bastard Dishliquid) made for the awards show. He had the whole crowd of rolling and rightly so. I realized that afternoon that T. had already hit the road for Virginia and I had forgotten to take my suitcase out of his car. This caused a little panic at the end of the day but we eventually touched base and got it worked out.

I had to skip the cartoonists closing dinner that night so JustChristine and I could hit the road. I stayed with her and JohnnyAce Sunday night, we watched the BSG finale and I flew out of Newark that morning. I have to say a special thanks to JustChristine for making this trip happen for me. She provided the plane ticket and room and board and was a pheonominal host. She also volunteered for Webcomics Weekend and worked her ass off while the rest of us partied. She’s a trooper.

The best way to explain the magic of Webcomics Weekend was that everything that could have gone wrong DIDN’T. Everyone helped everyone. It was like a model for a perfect society. There was no greed or diva behavior. Everyone treated each other with respect and contributed what they could for the greater good. It was like a little pocket of perfect communal existence. I think we can chalk that up to the fact that webcomics readers are the greatest people on the planet.

I will certainly be there next year. Will you? Were you there? What was your favorite part.