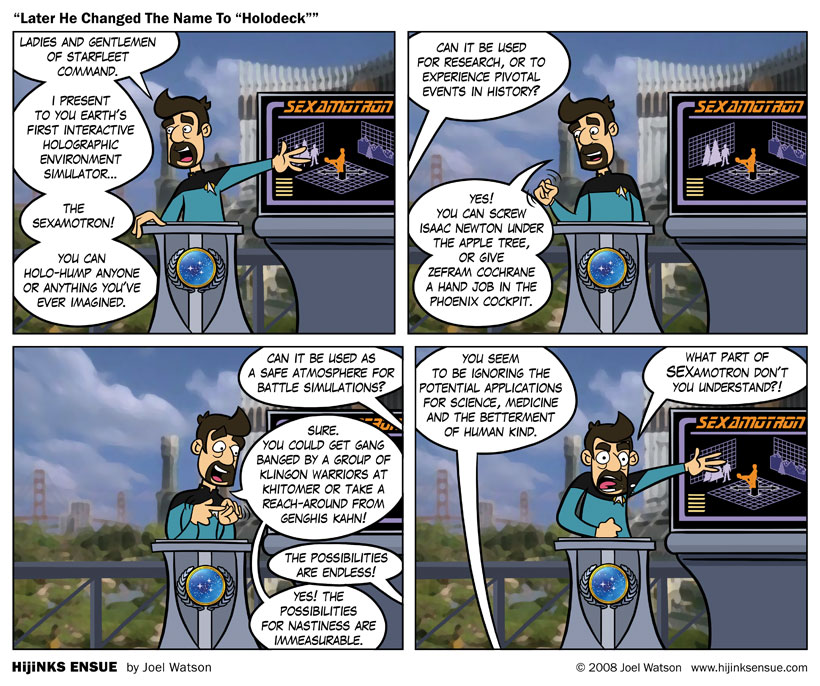 I’ve gone on record as saying the entire idea of the “Star Trek Utopia” would fall apart the moment the common man had access to a machine that let you fuck any person, living or dead, in any fashion, in any scenario that they desired. The pillars of civilization would break down and society would cease to be.

Think about it. The weirdest, most fucked up, abstract perversion you’ve ever even imagined could be fully realized in seconds without having to get consent from another living human being.

“Let’s see. It’s Tuesday, so how about a woman, 1o, no 18 feet tall with the face of Dwight Eisenhower, the body of a 1968 Chevrolet pickup truck…”

“…manual, and the hind legs of a North American Wildebeest.”

“My seveth grade English classroom. Populate with professional wrestlers in sun dresses urinating into plastic lunch boxes, orangutans with machine guns on trampolines, and 2 middle aged men having a furious argument in Russian. Naked of course”

Either society would crumble… or all men and women everywhere would be completely happy and fulfilled. The divorce rate would plummet, crime would all but vanish… damn it. THAT’s what brings about the utopia. Everyone is getting their hump on to the fullest possible extent.

Regardless, I made this comic because I’ve been watching “Voyager” reruns late at night. Last night I saw the episodes “Fair Haven” and “Spirit Folk” where Captain Janeway starts dating a hologram that Tom Paris programmed. No one gives her any shit either. They’re all, “so how’s it going with your boyfriend, the application?” Let me make clear that if she were just BONING a hologram (their intended use) I would have no issue with it. No, she falls IN LOVE with it. That’s like me getting romantically involved with my FTP utility and expecting my peers and loved ones to accept it.

“You don’t understand! CyberDuck and I are in love! Isn’t that right, CyberDuck?”

You’re all bigots. Shame on you.