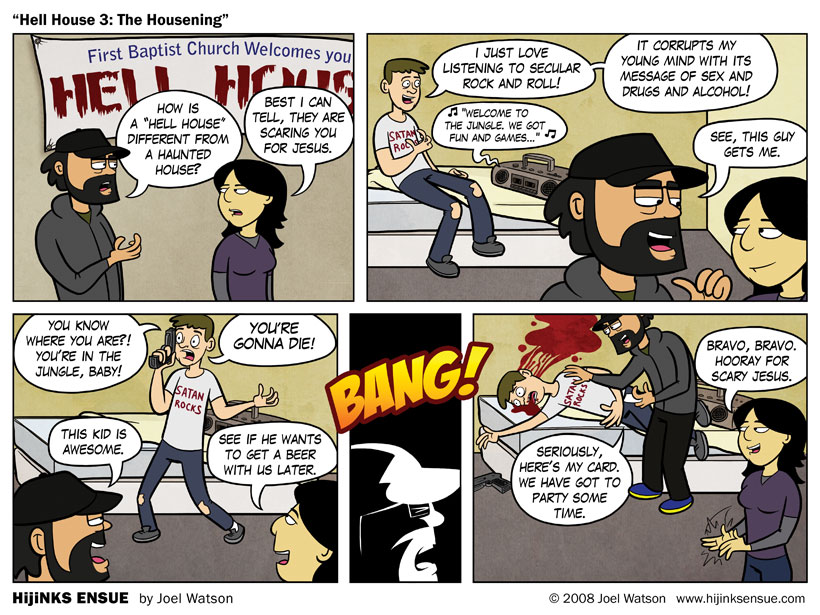 After all of these little one act plays were performed for us (many of the children were convulsing and in tears – PRAISE THE LORD!) we were lead into a room full of coffins and told to “get in.” (still not making any of this up). I got into a coffin with a girl that I had a crush on. Unfortunately I wasn’t able to make my move because she was too busy sobbing uncontrollably, and having a claustrophobia induced panic attack. A voice read our collective eulogy, then the back of the coffins sprang open and we were catapulted into Hell. I’m assuming dimensional gateways were involved. Demons were dancing around a pit of fire as the Prince of Lies himself stood atop an altar shooting laser beams into our eyes (still still still not making this up – all true). Satan had a giant evil goat mask, red cloak, an ample supply of smog machines and (seriously) laser pointers mounted to each finger with which he wrote his initials on our retinas.

Just beyond the eternal torment and despair there was a doorway, beaming with light (and more smog). Turns out the portal to Heaven is just behind Hell… sort of in the back-left corner. Afterward we were further indoctrinated counseled by various members of the congregation and encouraged to come back and bring our “unsaved” friends. Because, honestly, if Hell House didn’t scare the shit out of a little kid until he believed whatever the shit you told him to believe, what else could?

In retrospect, I am deeply disturbed by the amount of fear and guilt that I was purposely saddled with as a “youth group teen.” They seemed to be intentionally molding maladjusted young adults. I suppose a guilty, fearful and confused kid is easier to brainwash teach.