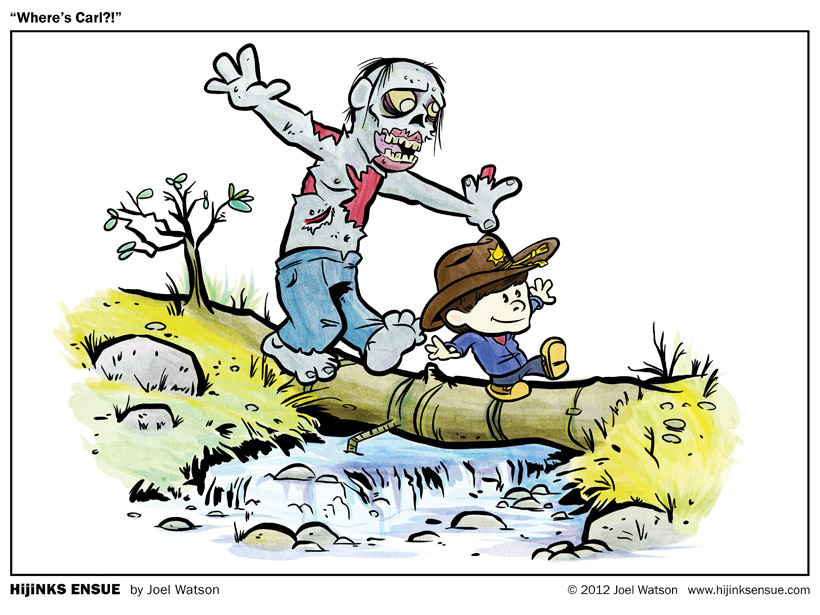 NEW SHIRT!!!  Where’s Carl?! Shirts based on this very comic are live at Sharksplode!

Where’s Carl? NOT where you told him to be, that’s for damn sure. That kid is exactly where he is NOT supposed to be (where ever the most zombies are), doing exactly what he is NOT supposed to be doing (which is anything but staying nearby and surviving) with EXACTLY who you told him NOT to be with (basically anyone that aren’t his parents). That Carl is a scamp and a half!

The Walking Dead season 2 ended last night and my spoiler free review for the entire season goes thusly: There were five boring episodes then one cool thing happened at the end of number six, then five more boring episodes followed by two rather awesome episodes. Looks like AMC’s whole “give us double the episodes for half the money” strategy didn’t really pan out. You could probably edit the entire season down to six quality episodes, but as it stands there was hardly three hours of good story telling or interesting action in the whole season. There was too much time filling, too many arguments over the same issues, NOT ENOUGH ZOMBIES, too much of every character saying the same thing over and over again, episode after episode, NOT ENOUGH ZOMBIES, too much time standing around the god damn farm, and NOT ENOUGH ZOMBIES.

If there is interest, I will consider a T-shirt as well.

COMMENTERS: How do you feel about this season of The Walking Dead compared to the first? Were you satisfied with the ending and where they seem to be going with season 3? NO MAJOR SPOILERS IN THE COMMENTS. IF YOU MUST POST SLIGHT SPOILERS PLEASE MARK YOU COMMENT AS SUCH VERY CLEARLY.