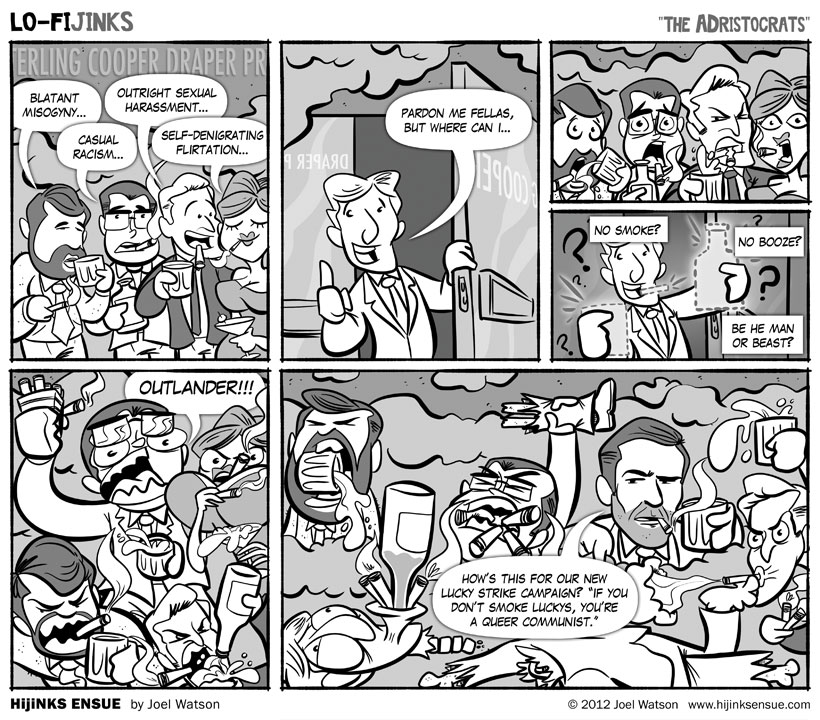 KNOW THESE THINGS TO BE TRUE:

My wife and I are currently plowing through all 5 seasons of Mad Men. We’ve been running an average of about 3 episodes per night and are about halfway through season 4 (NO SPOILERS!!!!). Almost immediately I knew everything I’d heard about the show was true. The acting, the writing, the believability of the world, ALL were superior to nearly everything else on TV (save for Breaking Bad). There are moments when the racism and sexism are TRULY and BRUTALLY shocking, but those elements are never used in a sensationalist way. Rather they just remind the viewer how far society has come in 50 years and occasionally how far we’ve left to go.

Consuming so much superlative TV in such a short amount of time (the same way I blasted through Breaking bad, 1-2 episodes a night, every night), I’m starting to really coalesce a Unified Theory of Television. What I mean is, I’m beginning to realize that regardless of genre, setting or subject matter, every television show geared towards me (a human person smack in the middle of all the prime demographics) either fails or succeeds based on the exact same successes or shortcomings. I noticed that not even 3 episodes into Mad Men, I was pausing the show to talk to my wife about a character’s motivation, how they really felt vs. what they were saying/doing, what their next actions might be and what repercussions those actions would have on their future and the other characters around them. This and THIS ALONE is the halmark of quality television.

I understand the formula is complex (writing, plus acting, plus directing, divided by budget, times network confidence and promotion, times Pi, etc, etc), and can rarely be duplicated with a resolvable, remainderless and equal solution, but my point is that all of these issues will have for the most part already been addressed before you and I, the viewers, see the end result. So let’s assume that all television shows have an equal opportunity of having a good premise, quality writing, and strong actors (which they do not, but let’s assume it anyway to simplify things). If, by the second or third episode, I am not either questioning or relating to a character’s motivation (which implies that said motivation is presented CLEARLY), then there is little hope that this show will hold my full attention. Let’s hope it has plenty of special effects and maybe dinosaurs (which we all know can’t always save a boring show).

My friend Amy Berg is a talented and successful writer in Hollywood machine and she always says, “What does your character WANT, and what is PREVENTING THEM from getting it?” While watching Mad Men, I began to think more and more about this idea. You see, at first I avoided Mad Men because I thought the whole “Period piece set in the 60’s” was a gimmick and would be overwhelming to the story or hokey in some way. I very quickly realized that, when executed correctly, the story and the characters trump the setting or the gimmick. As long as the show is telling a human story that explores wants, needs, hardships and triumphs then it will be relatable to the audience. Be it set in the 1960’s or a derelict spaceship during a robot war, a good writer can always tell a human story and a good actor can always convey emotions that will suck the audience in to their world.

I began comparing Mad Men to Revolution and that’s when my hypothesis really started to pan out. I couldn’t figure out exactly what it was I didn’t like about Revolution. It had most of the elements that typically draw me in to a televised work of fiction. It had a distopia and a dude from Breaking Bad and Katniss is there too. Lots of things to like. So why was I ready to give up after 3 episodes? I realized the premise, the show iteself WAS the character. Every human in Revolution acts solely as an extension of the premise and serves only to further the overall plot. “Where did the power go? Will it ever come back.” The individual characters are all replaceable and interchangeable. The thing needs to get from point A to point C, but only after it blows up the other thing at point B. ANY CHARACTER can achieve these goals. The plot still gets where it’s going and the audience is only attached to the action or the mystery rather than the characters. I would get just as much enjoyment out of an episode of Revolution if all I did was read the synopsis. In this case I think the failure is writing. I know at least 2 of the actors in Revolution are quite talented, but they are delivering less than captivating performances and I believe they haven’t been given much of a reason to think about what their characters really want. I could go on and on about Revolution‘s failure to impress me, but this is supposed to be about Mad Men.

Another thing I realized while shotgunning season upon season of Mad Men was how important the “show don’t tell” rule can be in television. Take another example of a show I try very hard to like, but can’t seem to stop finding fault with: Falling Skies. Every single character on Falling Skies speaks with the same voice. They all talk the same way, express themselves in the same way, get angry, get happy, get whatever in identical fashion. This starts to become super apparent when you realize that every character on Falling Skies explains their motivations with the same technique: the fond remembrance. Character 1 says, “Why did you let those aliens go? We’re at war.” Character 2 replies with a pause, then, “When I was 8, my dad used to take me to the batting cages to hit balls. There was this other kid who BLAH BLAH BLAH THE MORAL OF THE STORY IS WHATEVER.” They all do it. ALL OF THEM. Kill them all and replace them with a new cast on the next episode and I won’t notice because THE SHOW IS THE MAIN CHARACTER. Don Draper can raise or lower an eyebrow and it SPEAKS VOLUMES. Now again, is it fair to compare exceptionally bad writing to exceptionally good acting? It depends. How much of Draper’s eyebrow movement relies on the page saying “Don raises eyebrow as if to say…” and how much relies on John Hamm’s ability to execute those instructions. Obviously both are required, but I presume that neither works without the other.

So what’s my point? I’m not even sure I have one. I just know that high quality premises are being ruined by lack of attention to character detail, and high quality actors are getting shafted by sub par dialog and a lack of overall vision for what a show is, what story it is trying to tell, WHOSE story it even is and where the whole thing is going. Mad Men, Breaking Bad, Fringe, The first 3.5 seasons of BSG, Firely… these are the shows that prove the impossible is actually all too entirely possible and that everyone else is slacking off.