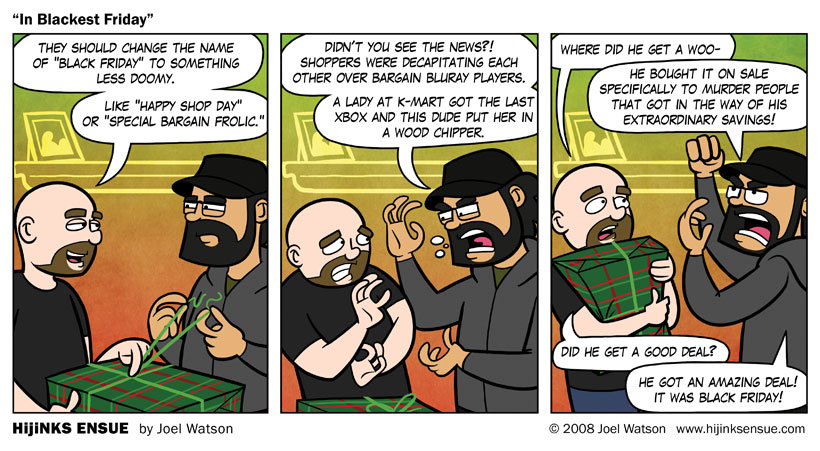 Just between you and me, I know this comic isn’t actually going up on Friday. One could say it was closer to the subsequent Sunday and one would be totally correct. One could also say that I’ve spent the last 3 days in a gravy and stuffing induced hybernation which would also be intensely accurate.

I had a comic planned for Black Friday some weeks ago that involved a zombie movie-esque scene where retail workers were baracaded in their store, then the deal-frenzied horde would break in and devour the savings. You can’t spell BaRgAINS without… you get the idea. Any who, I thought I was doing pretty good for planning ahead. One less comic I would have to write minutes before I started drawing. I took Thursday off for FAMILYGRAVYSPLODE! and planned to draw the comic on Black Friday. That was until the ridiculous events I had conjured up ACTUALLY OCCURED.

That fact that someone lost their life so a bunch of fuckwastes could “get their savings on” is beyond disgusting. What a pointless death. I really hope the individuals that actually stomped out that persons life, clawing and climbing over each other to save $25 on a George Foreman grill are charged with manslaughter. As soon as the doors came off the hinges, someone should have said, “whoah guys, maybe we should calm the F down.” I guess BluRay players are the new blood diamonds.

Add to that the shooting deaths at a Toys R’ Us the same day and it’s pretty easy to see that we’re doomed. If you really “don’t wanna’ grow up” shoot yourself BEFORE going to a sale at a childrens’ toy store. Ya’ know, cuz their might be CHILDREN there.

That said… WHO GOT A REALLY AWESOME BF DEAL?!