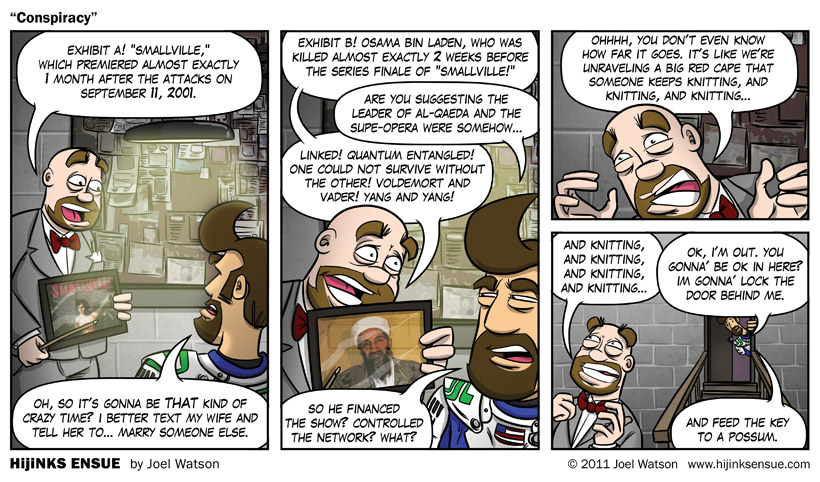 Ten years later and all I have to say is, “Fuck you Smallville. Fuck you right in the eye.” I posted something on Twitter about how watching the series finale of Smallville was like taking your last, tar-filled drag on the day they stopped making cigarettes. I think that about sums it up. I’ve always know it was bad for me, and no good could come from it. I knew that I was hurting myself and, more importantly, the ones I loved by indulging in such a self-destructive habit week after week. The only way I was able to break free of its toxic hold on my life was to surrender the choice to a higher power. Namely the CW executives that cancelled the show. They have cut off the supply chain for this particular brand of poison and relieved me of the need for personal courage or strength. I am still a broken shell of a man, but at least I can’t continue to feed the monkey on my back. His banana boat has sailed… Ok, that metaphor was pretty weak, but you get the point.

I was going to write something about how you shouldn’t mourn Smallville (even for the guilty pleasure) in the same way you don’t mourn the passing of someone who’s been ravaged by cancer for a decade. When the end comes you are just happy they aren’t suffering any more. Then I realized Smallville wasn’t the patient… I was. Smallville was the disease. Then I got sad. Then I ate some cookies. There was a whole shame-spiral thing.

Regarding the above comic: The timeline is pretty weird right? I mean I know it’s a total coincidence, by damn. Two great evils, two pock marks on our nation, filling our hearts and minds with fear, existing side by side for almost exactly the same ten year span. That shit is bizarre.

Another thing: My friend Sam revealed his next, groundbreaking project in this blog post, which I had a small part in creating at TCAF. It is both terrifying and your new favorite internet thing.

COMMENTERS: We are talking about doing an All-Smallville podcast this week. Sort of a soul-colonic to rid our bodies of the toxins left by a decade of exposure to radioactive sadness. If you have topics or questions you would like addressed in the comments, feel free to post them there. Otherwise, feel free to post anything you like about Smallville in general or the finale. Finale spoilers are fine. This is a safe place.

!!!COMMENTS MAY CONTAIN SPOILERS FOR THE SMALLVILLE SERIES FINALE!!!