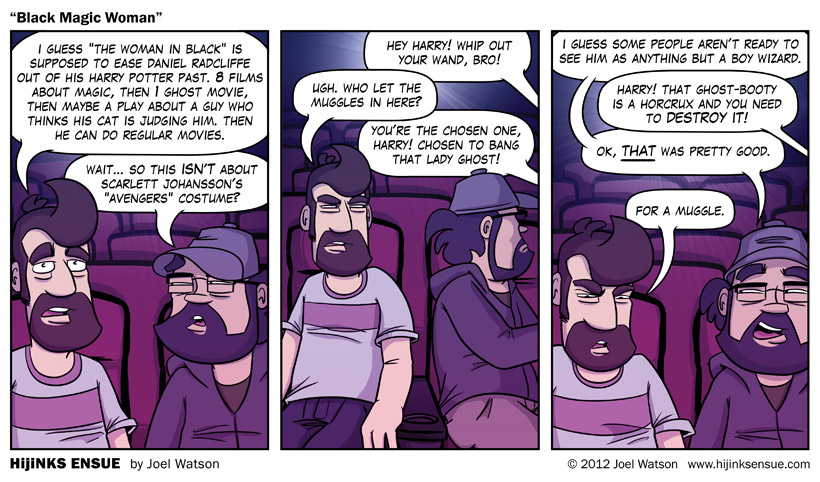 My friend Dave saw The Woman In Black and experienced a “muggle heckler” as pictured above. Some people are just so clever, they have to share it with a room full of strangers who’ve paid money to concentrate on something else.

I am never going to be able to look at Daniel Radcliffe and NOT see Harry Potter, but I don’t think that means I won’t be able to take him seriously in other roles. I will just have a harder time concentrating on whatever it is he is doing on screen that does not involve horcruxes, hippogriffs and Hagrids. Emma Watson, on the otherhand… well she has that new short haircut… and the soft skin… soooo sooooft… sooooo skinnnnnnn… [eh hem] Yeah, I think her career will be just fine. Then there’s Rupert Grint. Look, Rupe, I know a lot of guys at comic conventions all over the country and I’m sure I can get you brought in as a guest to a few of them. Have your mom call my people.

Oh, and I did something very bad on my Tumblr.

COMMENTERS: Do you think the Harry Potter kids will be taken seriously as actors beyond their magical personas, or will they get shuffled off into convention circuit oblivion? Who do you think is the best example of a child star overcoming their “big” role? Which actors were you never able to see as anything but the role that made them famous?