TORONTO FANCY BASTARDS! I will be with Cyanide & Happiness at FANExpo Canada, August 28-31 at booth 456! I’ll have lots of shirts and prints and we’ll be doing sketches all weekend. We’ll also be hosting the 3rd annual Toronto Banana Bar Crawl! I hope to see you there! MORE INFO HERE! 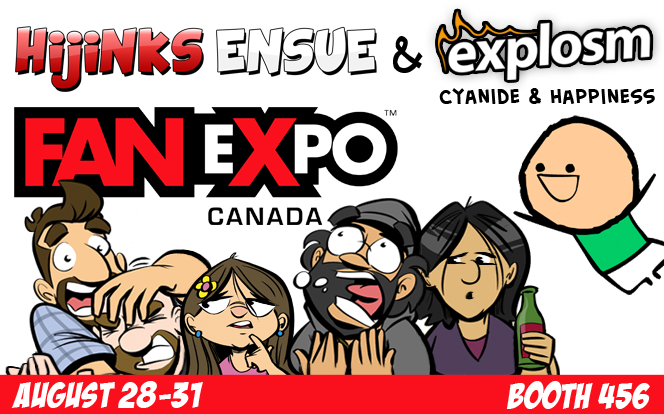 Cartoonists are an odd lot. You put a pen in our hand and it just starts drawing dicks. It’s a reflex. To tell a cartoonist NOT to draw a dozen dicks on a table cloth at a nice restaurant is like telling them not to exhale. Our bodies just DO that. So there’s the physiological side of this issue and there’s also the sociological imperative. As this comic mentions, I… WE are from THE INTERNET, so we are not bound by the traditional and outdated “Do not draw a hundred dicks on everything” based system of values. We are evolved. Much like the anthropomorphic dicks I might draw, who they THEMSELVES have their own dicks. See? That kind of forward penis thinking doesn’t come from being confined by societal norms! It comes from the unadulterated freedom an Internet cartoonist has to express their-self through FREE EXPRESSION. The kind of expression where a humanoid dick can be depicted with any number of additional dicks! Dicks for arms? Sure! Dicks for eyes? YOU BET! An ever repeating fractal dick where the dick’s dick ought to be? THIS IS AMERICA, GOD DAMMIT! DRAW DAT DICK!

Calling all Whovians with holes in their ears! Just look at these Sonic Screwdriver earrings my wife made!