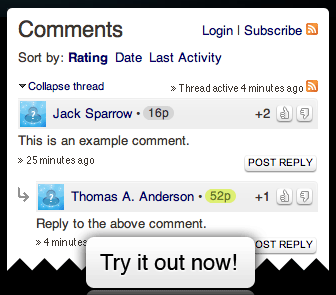 I’ve added a Twitter link to the sidebar. Follow my tweets if you like. I am hoping to use this to relay comic progress updates, and sneak peaks to regular readers. Mostly it will be me complaining about procrastinating.

If you are reading this on Livejournal, I have some badish news. The WordPress plugin that I use to cross post to LJ (LJXP) doesn’t work well with the newest version of WordPress. As you may have noticed, it double posts all the time and I have to go in and manually delete the extras. It’s very frustrating and is ruining the LJ experience for me.

I really value everyone that discovered this site on LJ and all the great comments I get. I do not want to lose that. Until I figure out a better solution, please befriend the LJ Syndication Feed and comment HERE on the site (not the LJ feed, since I won’t be notified).  You can also add the plain old RSS feed to your feed reader of choice.

Don’t remove HijinksComic from your LJ friends, since I am going to try and find a better solution. LJ Readers, feel free to comment on this post on Livejournal and share any thoughts.

I added some new features to the site with some great WordPress plugins. Now when you make a comment on a post you can subscribe to that post’s comments via email. Let me know if it doesn’t work.

My very good friend Daniel is a father today. To clarify, he was not one yesterday. I would be a super way to congratulate him if you checked out his photoblog, Arranging Light, and bought a print of one of his awesome photos. There are photos of trees and skies and animals and boobs. I swear they will make you happy.

Thursday’s comic will almost certainly be posted on Friday due to H.I.B.L. (Holiday Induced Bastard Laziness). It’s a serious affliction that, if not treated, can lead to C.L.A.S. (Chronic Laziness Asstard Syndrome).

So is bacon. I should have a site called: http://baco.nisdelicio.us

You will notice at the bottom of each comic and blog post, there is now a “Share This” button. Using the excellent wordpress plugin of the same name, made by this nice man, you are now able to easily bookmark, digg and email HijiNKS Ensue Geek Comics to your friends the enemies. 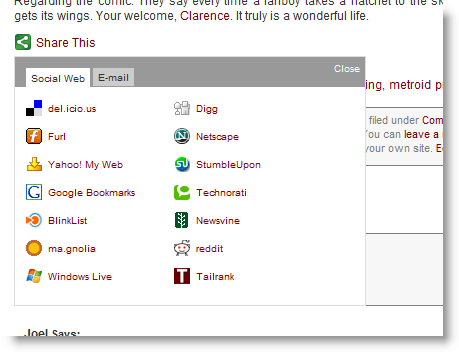 I’m finishing up the new comic right now and hope to have it up tomorrow morning. Keep the emails and comments coming. Join the email updates list by emailing me at comics at hijinksensue dawt comz and make sure to add the Geek Comic RRS feed to your RSS thing.