I didn’t get a lot of submissions for the OLPC comic remix but I think these two are the some of the best I’ve received so far. With no further delay:

“A Glitch in the Matrix” by Chris Fairfield

Thanks for twisting the wound on my recycled artwork. I love the dinosaur at the end. A reference to this, perhaps?

“My First Macbook” by Scott Reu

Here’s what’s so great about Scott’s entry. He has NO IDEA that when Josh sits down at your computer, he immediately starts changing your settings, key maps, bookmarks, audio drivers, FF plugins, etc. It’s fucking infuriating. Scott, did this come to you in a dream? Was Josh naked? Was I speaking backwards? GET OUT OF MY HEAD, SCOTT!!!!

Here’s the remix blank for “Robots are everywhere, and they eat old people’s medicine for fuel”

Send your entries to comics(at)hijinksensue(dot)com.

This is an HE first. Boing Boing has picked up the Doug Morris comic. That’s basically the coolest thing ever. Thanks Cory D.!

It also just showed up on:

This should be a very exciting afternoon!

WIRED picked it up too. I think that means the cosmic circle is complete.

Valleywag (from Gawker Media) are on board. Thanks, Internet!

Digg made the front page around 6pm. 248 Diggs and going strong.

Idolator and Gizmodo (also from Gawker).

NY Mag.com got in on the action.

Seriously, a link on Gizmodo is a geek achievement. It’s been a really good day. 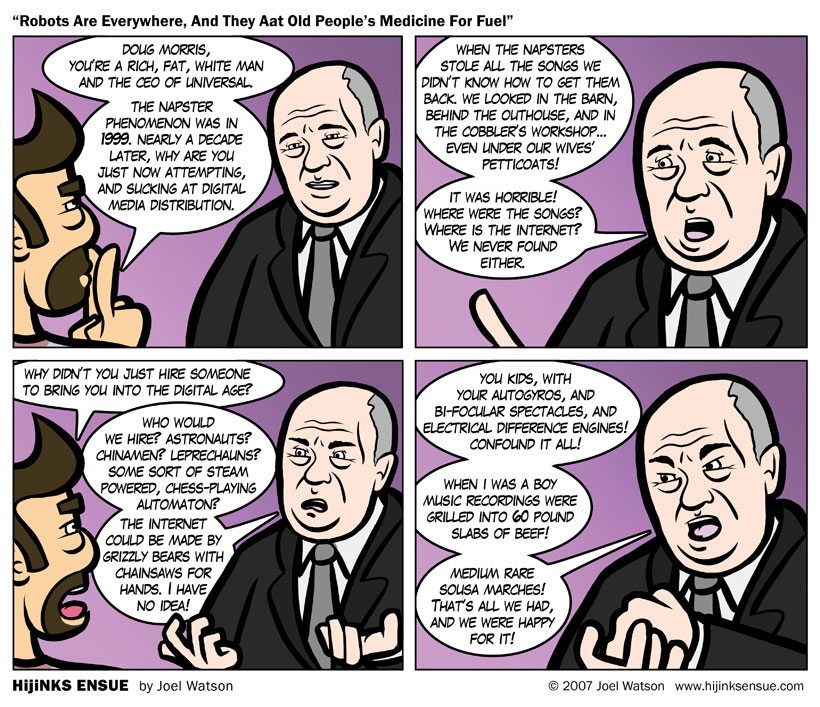