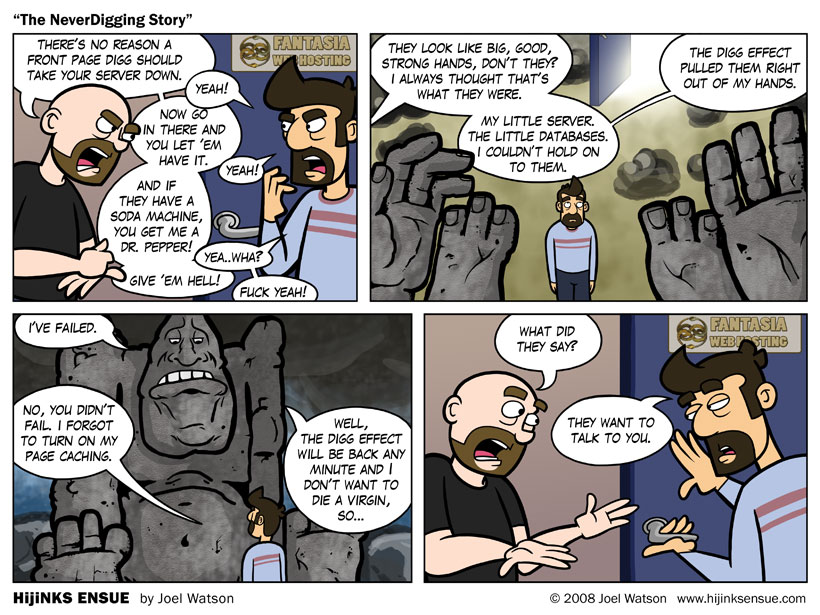 Today’s comic is the miracle baby of this comic and this comic. I wonder if I’ve violated any international statutes by doing two “Neverending Story” references withing a 12 month period. I’ll probably get a small fine and slap on the wrist at most.

The current HE server was able to withstand the last two front page Digg’s MUCH better than my old shared hosting solution, but there was still several hours of down time for each bediggification.

Regarding the comic, I tried something different this time. I DREW the comic… ON PAPER!!! 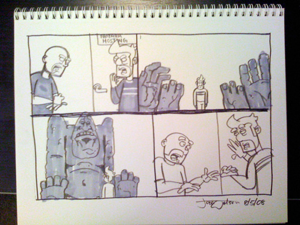 Check that out! It’s like a new (old) world. This was basically a test to see if I was still able to draw when pixels weren’t involved. I’m considering making this a regular thing and selling the one of a kind, signed originals with a print of the finished comic. Any interest?

After announcing the Donation Drive yesterday you guys have already knocked  me on my ass. Monthly subscriptions are at $280/month (over 10% of the goal!) and you sent an additional $500 in one time donations! I am floored by your support and generosity.

The goal to keep The Experiment going is get $2000-$2500/month (roughly half my required income to take care of my bills and family) in Donation Subscriptions in the next 30-60 days. Get ready for me sounding like a broken record because this is going to be my main focus for the next month. Together, I’m pretty sure we can make this happen.

Special thanks to Adam and Chris at Save Hiatus for pimping the Donation Drive. It’s like they have had practice rallying people around a  cause or something.

If you have already donated, or are unable to, please spread the word about what we are trying to accomplish. The more Fancy Bastards the better!

I wanted to share this with you guys. This is a rough sketch for the “There Will Be Blood (poptarts)” comic. It’s partially inked. I thought you might like to see part of what goes into creating the comics. 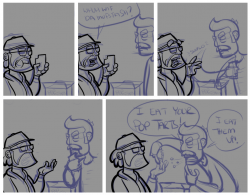 We managed to record the podcast last night. I’ll have it up in the next day or so. Oh, also a picture Eli took of a Portal Cosplayer at All-Con made it to the front page of Digg. Neato.
-Joel 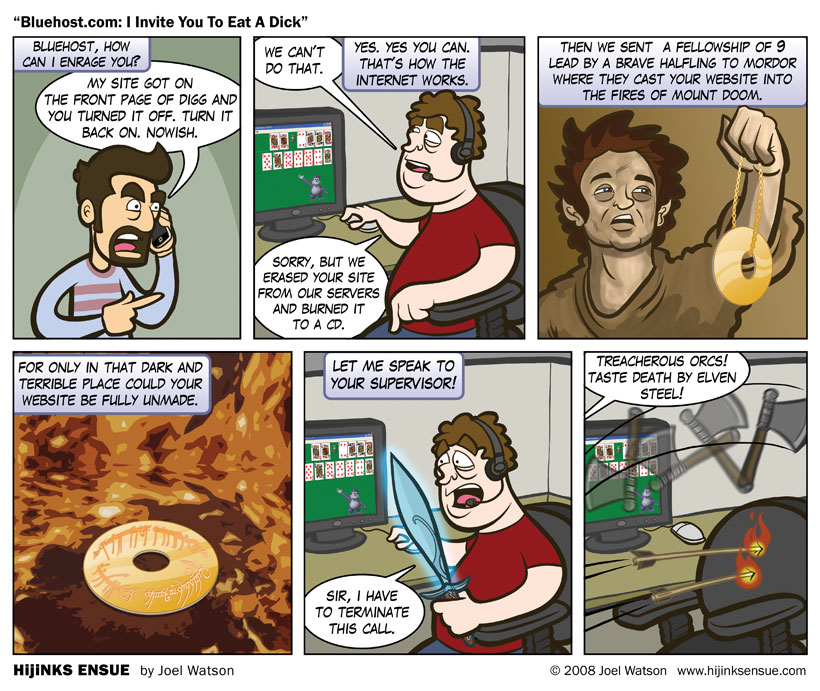 The story of how Bluehost.com fired me for getting Dugg.

When I started this site in May of 2007 I did quite a lot of research as to the technology I should employ and the companies I should trust. I read countless reviews of publishing solutions and hosting companies. Settling on WordPress with ComicPress, I only needed a place to pitch my proverbial tent.

Bluehost.com was well reviewed and even listed in several places as being a Digg-stable or Digg-proof (this is important later in the story). I signed up with them, prepaid a year and Hijinks Ensue was born.

Lesson 1: Hosting for $10 a month is cheap. How often does “cheap” have a positive connotation?

I’d say, “My site is down, again.”
He’d reply, “Really? Did you look at the error logs? What did they say?”
“No Morpheus, I don’t read Matrix. Take your typing finger out of your asshole and look them up yourself.”
“Yeah, your site’s down. There must be a problem.”

And so on and so forth until my head would literally pull a “Scanners” and my wife would have to clean up the mess and get me a new head.

One time a Bluehost rep told me I was on a “messed up” box that always had a lot of problems. I told him to move me off of it and he refused. There was some sort of moratorium on moving people away from Box 269. “Why?” I asked.

“Cuz everyone that’s on it wants to move cuz it’s always messed up and stuff.”
More solid an argument I have never heard.

Fast forward to the first time one of my comics got a front page Digg. 100,000 people trying to ping a shitty server all at once is a lot like 6 rhinos trying to fuck the same watermelon. In this analogy my server was not one of the rhinos.

This time I saw it coming and called Bluehost support as soon as the site went down. Let me use my “I shit you not” voice when I say this. The tech guy told me I should upgrade to a dedicated box. I asked how much that was, and he said they didn’t offer them. I asked why and he replied (here’s the part where I’m not shitting you in the least), “Our three owners are making so much money, they really don’t care if you need a better server.”

Then the douche-taster asks me how to get on Digg because it sounded like something he would like to do. I assume he hosted elsewhere.

After my next front page Digg had me down for almost a day, I paid to move to a “High CPU” box. The moment they “upgraded” me my IMAP email accounts went shitballs, spitting out errors left and right. I sent in a trouble ticket (knowing good and well that most of my previous TT’s went completely unanswered). They responded to the ticket 3 weeks later saying they couldn’t replicate the problem. Think about that for a second. Let it stew. That’s like me bleeding to death in my garage, my arm severed by a chain saw, and 911 refusing to respond. Instead they send my loved ones a letter a month later saying they couldn’t replicate the problem.

So Valentine’s Day 2008 rolls around and I prepare a token of my love to my readers in the form of a special Valentine’s card. Come about 10 pm it hits the front page of Digg (sensing a pattern?). The site screeches to a halt and bursts into flames. I expect to go through the same BS to get my site turned back on, but this time the bullshit is new. Not only do they refuse to turn my site back on, but they try to convince me it’s impossible to do so even if they wanted to. As if they had cast cement shoes around my site and sunk it to the bottom of the ocean. Hey, insult! Here comes injury!

“We’ve left FTP access active so you can get your files and move them to a different server.”
“You’re firing me?!”
“Did I stutter, mother fucker? Get your shit and get the fuck off our box!”

At least that’s how I remember it.

I screamed at that guy so loud, I think he peed. In the end, his manager agreed to a 48 hour stay of execution while I found a new home. The site is now safe and sound (?) at Media Temple. DNS is still resolving for various parts of the world, but it should clear up in a day or so.

So tell me, what are your hosting horror stories?

UPDATE 2/21/08
UnCheese It! They know nothing! And what they don’t know, they make up! And by THEY I mean THIS ONE DUDE! Several readers pointed out that Weasy had amended his statement about my dealings with Bluehost.I sent him this email:

Hey, Weasy. Have all the opinions you want, but one thing I don’t appreciate is lying. You show me one “illegal material” on www.hijinksensue.com and I will remove it. How you can misconstrue getting Dugg as “abusing bandwidth” is beyond me. Somehow that implies malicious intent and, as I’m sure you know, getting a first page Digg is a passive act. I have no control over whether it happens or not. I think you just gave me some insight into why I was getting the caliber of service from Bluehost that I was.

Here’s the whole thread as of this posting. I wonder if someone at Bluehost lied to this dude, or if he is making this up as he goes along.

Again, STAY THE EVERLOVING ‘EFF AWAY FROM BLUEHOST!

Here’s a link to the first Tom Cruise comic on Digg. Digg it like Tom Cruise digs aliens out of people’s souls.  Did I mention this is shaping up to be a 3 part comic? There’s just so many nooks and crannies of Tom’s unbridled craziness to explore.

Monday will see Tom making his way into the city, perhaps on an ice sled or riding a giant bird.

Friday night saw my first front page Digg for a comic (the previous one was for the Guitar Hero III video). Special thanks to EvanStapler for submitting the story, and to everyone that Dugg it. As can be expected the traffic crashed my server and asploded my site. I was on the phone for 3 hours with my host trying to get it back up. I finally had to move to a more robust box (more robust = more $$$). Digg comments are a hard thing to read when they are concerning your own work. They range from innocuous to outright hateful. This was the best one:

I don’t have words for that. It’s poetry.

We were (this) close to seeing Cloverfield but got to the theater and saw this: 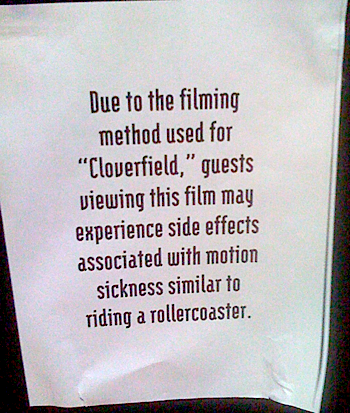 So we saw Sweeney Todd instead. My wife gets seasick easily and I have an inner ear/vertigo condition so I figured it best to see C-Field at home where I can sit in front of a puke bucket. Sweeney Todd was fantastic. Beautifully shot and excellently performed. The score was formidable to say the least. I enjoyed the movie even more when, in the first 15 minutes, two different sets of teenagers got up and left. “What’s all this gay singing and shit? Let’s get out of here and go have unprotected sex.”

Tom Cruise’s particular brand of crazy has been all over the net this week. In light of his galactic revelations I wanted to share this happy little accident I saw in Barnes and Noble a few weeks back: 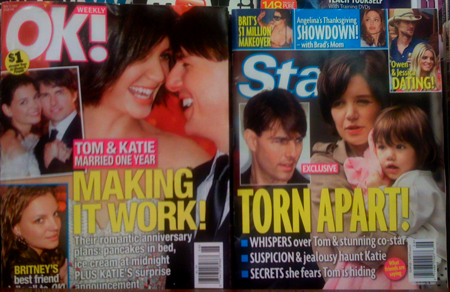