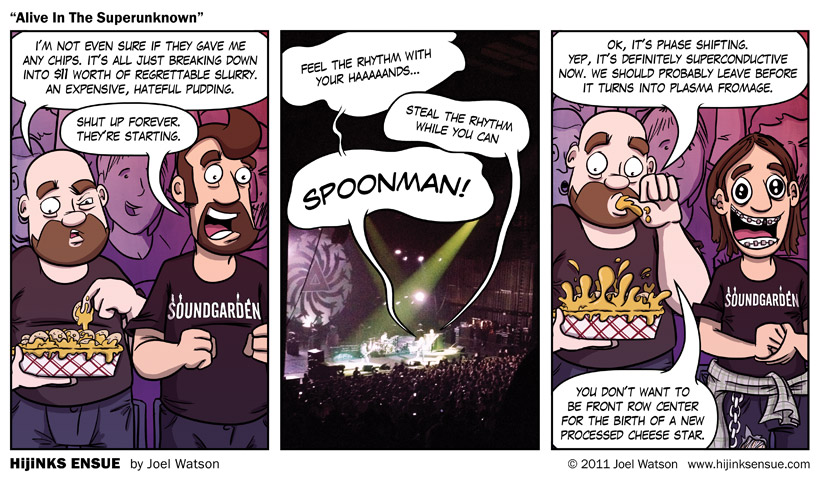 CRUISE FUNDRAISER UPDATE: As of 10/27/11, all 100 print packs are sold out! I expected this to take weeks if not months instead of days. I have to escalate the production and shipping schedule accordingly. I will add the last couple of characters to the comic/print in the next few days. Thank you all so much for the support! If you didn’t get a chance to order before they sold out, I might make the 3 bonus prints available in a pack for $30 if there is any interest. Let me know in the comments.

Fulfilling a 16 year long dream, I saw Soundgarden live for the first time last night. Josh was supposed to go with me, but he bailed at the last minute and my friend Roger (HE Podcast listeners may remember him from “Roger Court”) stepped in to fill his dirty flanel and Doc Marten’s. They were always one of those bands that I regretted not seeing in their prime (being 15 years old and unable to drive 100 miles to a concert by myself, let alone get permission to see THE DEVIL’s MUSIC performed live), and had vowed to see no matter what should they ever reform. Well, reform they did and I jumped all over the chance to see them when tickets went on sale a few months ago.

Luckily, despite having a new album in the works, they just played the hits. It was a cavalcade of all of my favorite Soundgarden songs back to back with no filler, fluff or bullshit. They played extremely raw. Every amp was too loud, ever guitar was over distorted, the bass clipped for the entire show and the vocal mic squealed feedback constantly. They played like a garageband. It was perfect. I had forgotten that this is what music used to sound like. Unprocessed, unfiltered, agressive, emotional and genuine. And despite all reason and human comprehension, Chris Cornell is still able to hit every high note, ever scream with attack, power and sustain.

I know this isn’t the standard geek fare you are used to with HE, but 90’s rock music is something I geek out on almost as much as Star Trek, so please allow me momentarily  to indulge my nostalgic music fetish.

COMMENTERS: What band from your glory days did you miss seeing live and have kicked yourself about ever since? What band will you drop everything for a chance to see live and why? Alternately, what music makes you instantly feel 15 again? I actually had tickets to see Nirvana when I was 11. I got grounded over some trivial bullshit (really just as excuse to keep me from seeing the show), and wasn’t allowed to go. Kurt Cobain died about 6 months later. I never have and NEVER WILL (honestly) forgive my mom for that mistake.

Jonathan Coulton is a personal hero. He’s just some guy from NYC that writes funny songs and distributes them over the internet. Over the last couple of years he’s turned his music into his full time job. He is completely supported by me and you and everyone else that enjoys his music. You’ve probably heard his folky acoustic cover of “Baby Got Back,” or maybe you were lucky enough to see him perform at this year’s PAX.

His rise to internet fame stems from the close connection he keeps with his fans through his website. Email him. I dare you. He’ll respond. He helped me with the code for Corn Mo’s music store just because I asked him how he’d made his own. What a guy! 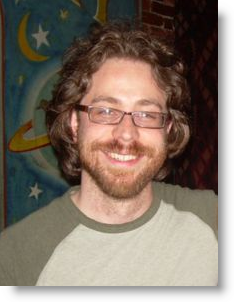