Where as the previous photo comic dealt with the party times bookending TCAF 2011, this one details absolutely everything that happened during the actual 2 day show. All of it! Not a detail omitted. It’s like you are living it RIGHT NOW!

I have tabled with Sam “Fuzzy” Logan twice now, and each time I seem to find new and more ingenious ways to mess with the stuff he is trying to sell to people. WAY TO GO ME! USA! USA! If you have not read Sam And Fuzzy, I suggest you fix your problem now (see what I did there?). If you need convincing, the comic is about a couple of dudes that inherit an ancient clan of ninjas and try to use them for good instead of assassination purposes. Also there is a vampire named Edwin who thinks the way to a girl’s heart is through her bedroom window while she is sleeping. Good stuff.

I can’t say much about the female Questionable Jeph cosplayer at TCAF, other than that she owes me one boner because upon seeing her, mine exploded.

Hey, look down at he bottom! It’s Angela again! If my carry-on bag was a Pokeball, she would be here in my dojo now. Alas, she has returned to Vancouver, or “Little Cold Hollywood” as the locals call it.

I hope you enjoyed the photo comics this week. I know it’s not typically what you come here for, but I enjoy making them and sharing them with you.

Rather than trying to recount every single crazy awesome thing that happened at TCAF in Toronto last weekend, I will instead communicate my excitement through photo comics.

This first installment contains the pre-show party at Ryan North’s house. He is the goodest of good people. He opened his home and his fridge to countless wayward cartoonists and we are all better for it. There was actually a bathtub full of beer. I don’t know if this is standard in all Canadian homes of if he went out of his way for us. I have my suspicions.

Featured in the first half of this comic are my favorite comicing girls, Danielle and Angela. They were the first two cartoonists I’d ever hung out with at a con, and the first to make me feel like part of the team. The man stalked by the captain is Chris, and elsewhere in panel 4 are my roommate/travel companion Paul, Bernie, @realitymonster and way off in the back there’s a bit of Anthony.

The second half of the photo comic shenanigans take place at the TCAF after-party hosted by Jeffrey of Topatoco at BMB Karaoke. The pocket monster enthusiasts are Becky and Frank, along with a repete performance from Angela. Frank and I made a pact to sing as many 90’s nu-metal songs as possible that night. Despite the Papa Roach and and System Of  A Down we belted out, I managed to only get video of him singing “Gangsta’s Paradise.” Early in the night Questionable Jeph concocted a plan to bring the house down and queued up “Don’t Stop Believin” so that  it would appear almost last in the rotation. I have video of his performance but I dare not upload it for fear of imploding The Internet. I also have a video of him singing “Enter Sandman” but that’s just for me…. juuussst for meeeee. Also seen in these panels are Sam “Fuzzy” Logan and his fiance Shannon. Sam will factor more into tomorrow’s photo comic when I show you what happened during the actual show.

YOU SHOULD GO PREORDER SHORTPACKED BOOK 4 by my friend DAVID WILLIS. THIS IS MY COMMANDMENT.

YOU SHOULD ALSO GO BID ON THIS PIECE OF PAPER THAT ME AND A BUNCH OF OTHER ARTISTS DREW ON AT C2E2 TO BENEFIT THE JAPAN RELIEF EFFORT. [MORE INFO HERE]

Almost all of this is a sort of entirely true account of Eli IRL’s bachelor party. Did you know the Sweet and Sassy party limo refuses to go to a bar or strip club regardless of how much you bribe or threaten the driver? I’m running off to Eli and Denise’s rehearsal dinner now. Tomorrow is the wedding! Will Eli take Denise’s last name? No one knows!

Update: Eli’s Red October cake made by James (the guy in panel 5 above holding the video camera). “Give me a slice, Vasili. One slice only, please.” 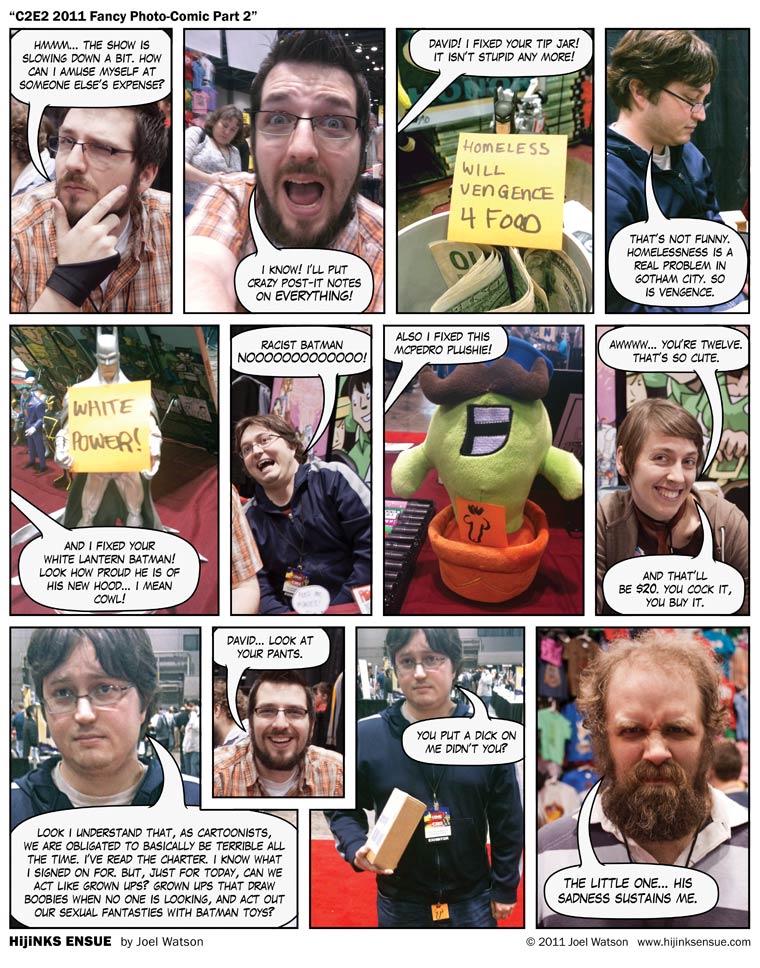 I’m heading out this morning to talk to a local high school art class about making comics. I think it’s part of the D.A.R.E. program. Drawing dicks Always Rapes Eyeballs or some such. Please enjoy this Fancy Photo-Comic featuring David Willis, Danielle Corsetto and introducing Randy Milholland as the ghost of Alan Moore.

Very special thanks to Super Webcomics Fan Jose Villalobos for taking a few of the pics that appear in today’s comic and posting them to Facebook.

I did a webcomics panel at C2E2 with Rob Denbleyker, Kris Wilson, Ryan Sohmer and the aforementioned Ms. Corsetto which, according to audience feedback, was the greatest panel in the history of con-dom [not condoms, though I’m am sure some nerds were knocking boots afterwards]. The audio of that panel will be posted [hopefully Friday] as the next episode of The HijiNKS ENSUE Podcast. I suggest you go ahead and subscribe via RSS or iTunes so you don’t miss it. I will tease you with two words: Yeti Murphy. 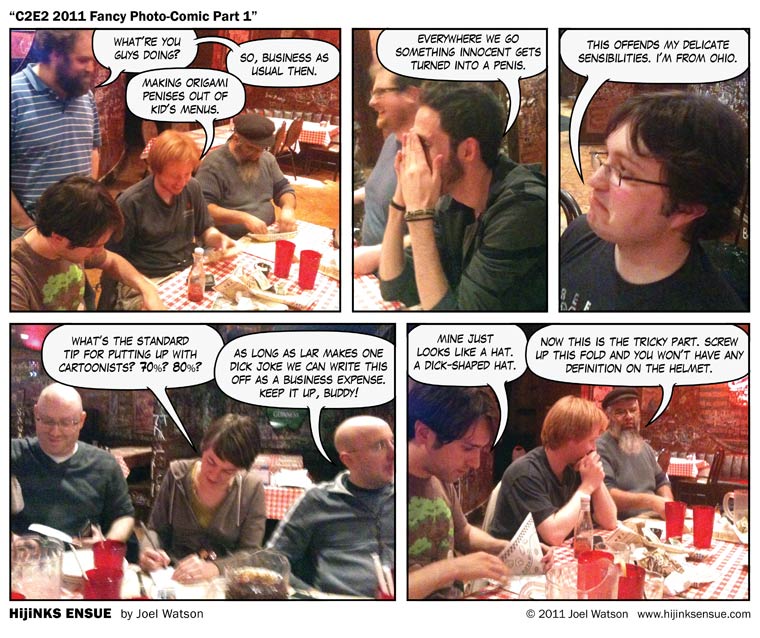 Still sluggish from C2E2 and finishing up a freelance project that has to be done this week, so please enjoy this Fancy Photo-Comic featuring (all the way from Internet) Randy Milholland, Rob Denbleyker, Zach Weiner, Lar DeSouza, James Ashby, Matt Melvin, David Willis, Stu Becker, Danielle Corsetto, and Ryan Sohmer.

I’m going to be speaking at a local high school art class tomorrow. Apparently they want to show the students the dangerous aftermath of a life spent making comics.