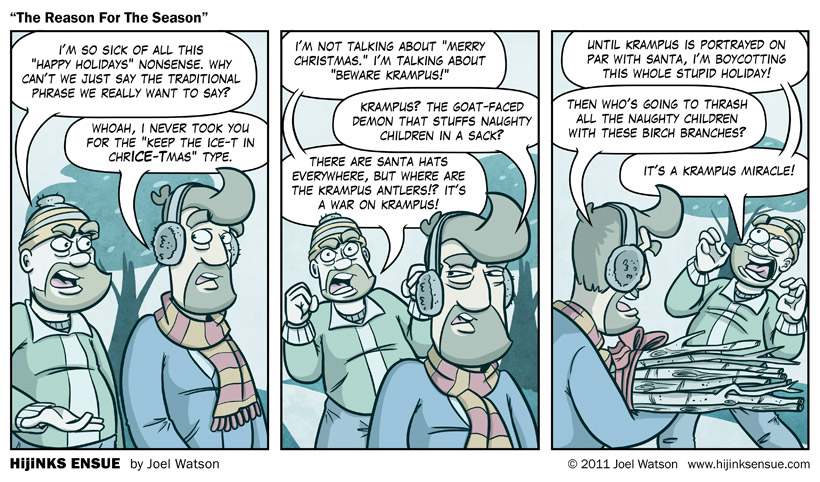 Put the Krampus back in Krampusnacht! I demand my crazy holiday beliefs receive equal commercial exposure! Keep your horn of plenty, because Krampus has horns o’plenty! Wait, I think that last one was more about Thanksgiving! STRIKE THAT ONE, but pay the necessary attention to the first two! OPINIONS!

It’s a sign of the degeneration of our culture that more people aren’t aware of Krampus. Much less aren’t strangled by fear of him year ’round. There are shocking similarities between Santa Claus and the exalted cloven hoofed one. They both have sacks that deal with children, they both have more hair than the average person, they both have 18″ red tongues, though santa’s is generally hidden by his beard, and they both live in remote lairs that the average child would not be able to find their way home from, were they dragged there in a sack.

You have a few days left. Please start saying “Beware Krampus” to any and all people you encounter, regardless of the situation. And do report back with your findings.

COMMENTERS: Have you encountered any “you should really be greeting me in the holiday salutation of MY preference instead of YOURS” type of situations? Any that stick out as particularly ridiculous? Alternately, please insert Krampus into the Christmas movie of your choice. Perhaps Tim Allen could have starred in The Krampus Clause? Or children might dread their annual viewing of How the Grinch Supported Krampusnacht. Spoilers: he was in favor of the beatings. Don’t do anything with that one where Michael Keaton was reincarnated as a snowman. That was terrifying enough as is.

“Then it’s not too late! Here, boy, take this and run to the butcher! Buy the fattest goose they have and take it to the Cratchet house! Paint it’s blood over their door and drape its entrails across their threshold! Leave the carcass as an offering to Krampus! No Cratchet child shall be tossed in a sack this night!”