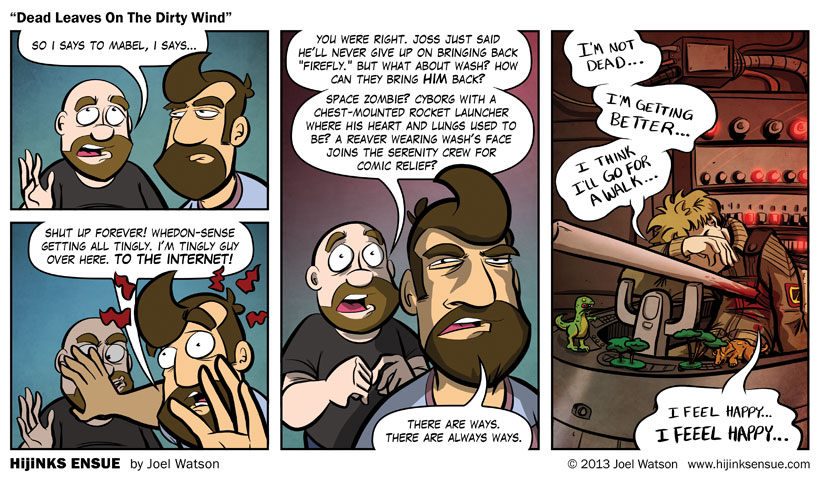 [STORE UPDATE 02/04/13] Thanks to the diligence of the Blind Ferret team, the HijiNKS Ensue Store is un-hacked, re-upped and back-backed! I’ve lost over a 1/4 of my merch revenue for the month (and Jan/Feb are already slow months) so let’s all go celebrate by BUYING SOMETHING!!!

My temporary PRINT SHOP with my BRAND NEW “TESLA UNCOILED” print and many of my most popular large prints is still up and running and probably will be until I return from JoCo Cruise Crazy 3. Get on that mess while you can!

COMMENTERS: Should the Firefly/Serenity ‘Verse continue, do you want them to find a way to resurrect Wash? If so, how? Long lost twin? Rapidly aged clone? Android haunted by the ghost Agent Coulson? I really hope it isn’t done with a Prequel since we wouldn’t see everything that changed in the ‘Verse post-Serenity. 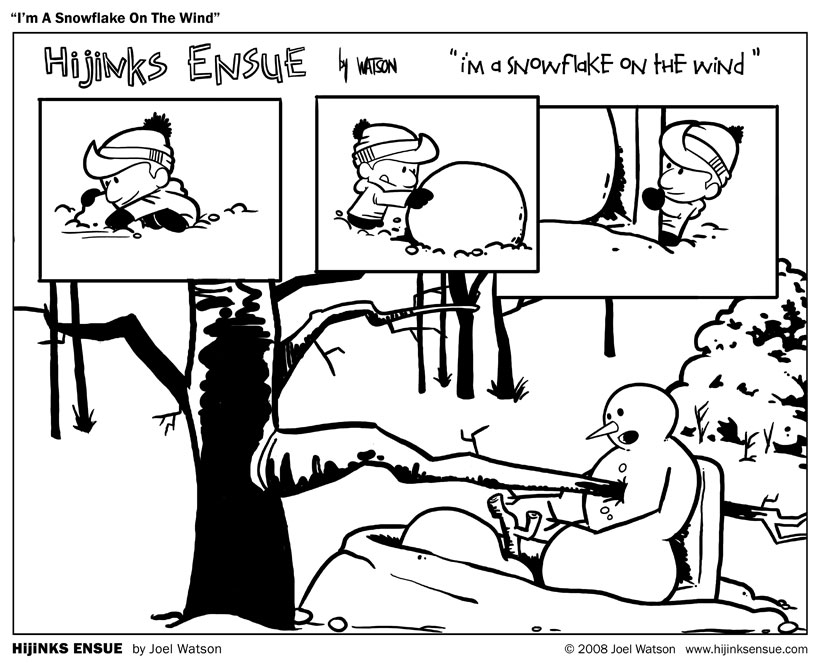 Bill Watterson and “Calvin and Hobbes” are two of the primary reasons I started making comics. Those of you who donate or subscribe to The Vault, have seen my earlier attempts to emulate his work (“it’s like Calvin and Hobbes but with a robot instead of a tiger!”).

I don’t know of a cartoonist that doesn’t list Watterson in his top three influences, so I won’t bore you with my treatise on how his work sparked my young imagination and ignited a lifelong love of comic strips and cartooning. I bet he wouldn’t be too thrilled with me aping his style to make a Joss Whedon/Serenity reference, nor would I be shocked if he didn’t get said reference.

I always looked forward to his snowman strips because they straddled a line between childlike innocence and subversion. I guess that same can be said for the whole of “Calvin and Hobbes,” but those particular strips (along with Spaceman Spiff) resonated loudly with me. My favorite was the snowmen looking on in horror after another snowman had been hit by Dad’s car.

Calvin’s Dad was a patent attorney. “The More You Knoooow!”