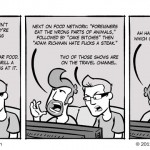 [Posting this a few days late for my friend Mikey Neumann’s birthday, but let’s all pretend it’s still Saturday. Shhh… nobody tell him.]

My friend Mikey and I lived this comic via Twitter a few days ago, so I decided to draw it up as a birthday present to him. You may know him as the writer of games like Borderlands and the Brothers In Arms Series. He also makes a web series on Escaptist called Anthony Saves The World. It’s got time travel and ninja swords. Check it out.

UPDATE [Tues April 19th]: You’re going to be hearing a LOT about this [from me] in the coming weeks, but I will start now by saying that a project I have had in the back of my mind for a couple of years has finally come to fruition. I have launched Sharksplode.com. It is NOT a replacement for The HijiNKS ENSUE Store. It IS a place that I can put up my more niche, inside, “maybe not for everyone, but definitely for super geeks like us” shirt ideas. First I am adding all of my retired HE shirt designs, then I hope to add a new design or so each week until my “I should totally make a shirt that says…” file is empty. If it is a success I’ll keep it going.

The best part about this news is that you can now order a “The Doctor Is In” shirt based off the “You’re The Last of The Time Lords, Charlie Brown” comic. It comes in blue or brown. So go check out the site, read the initial blog post and order you some wearable geekiness that will illicit awkward stares.

[Just a side note, I was up for 30+ hours straight working on the site, getting it working/ready to go, etc. so I am horribly behind on comics at the moment. I appreciate your patience.]