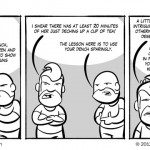 Check out my guide to HijiNKS Holiday Shopping and Shipping Deadlines (SPOILERS: Order stuff NOW if you want it by the 24th).

I watched Die Another Day for the first time a couple of nights ago. I don’t really consider Pierce Brosnon to be canonical Bond. He seems more like a Hot Shots-style Bond parody minus all the comedy. Speaking of “comedy,” Die Another Day is just CHOCK FULL of dick jokes. Like really terrible dick jokes too. Bond seems to punctuate nearly every thought with a reference to his “tip” or his “weapon” or his “raging erect shaft, I mean as to say the turgid column that is my male member, commonly referred to as THE DONGER.” That last one lacked a certainly Bond-esque subtlety. Anyway, that movie was terrible.

COMMENTERS: Are we all in agreement that P.B. 90’s Bond is silly playtime fake Bond? Is there a worse Bond (who held the mantle for more than one film)? 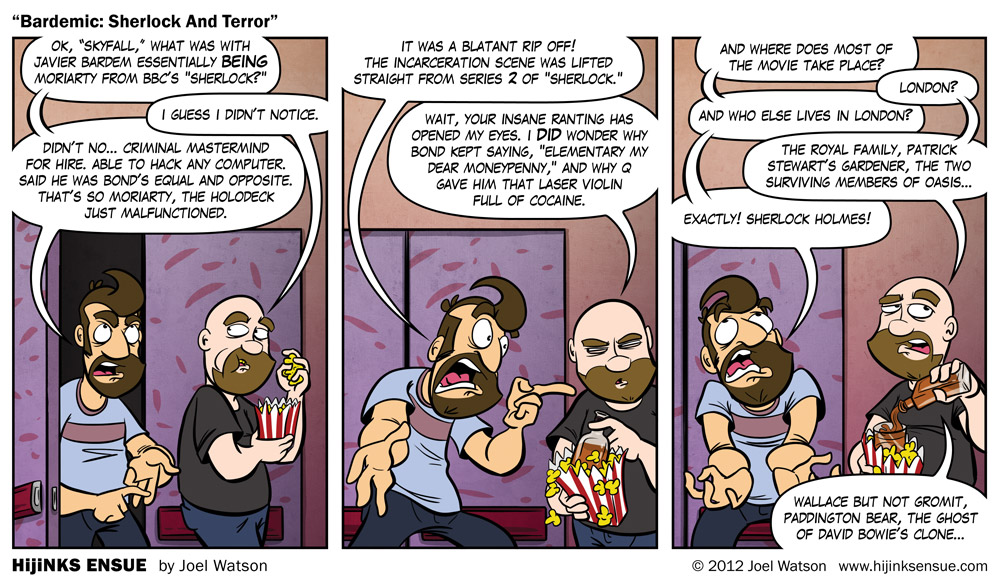 NEW Doctor Who/Dr. Seuss Shirt at Sharksplode!
DO YOU WANT A PRINT INSTEAD? 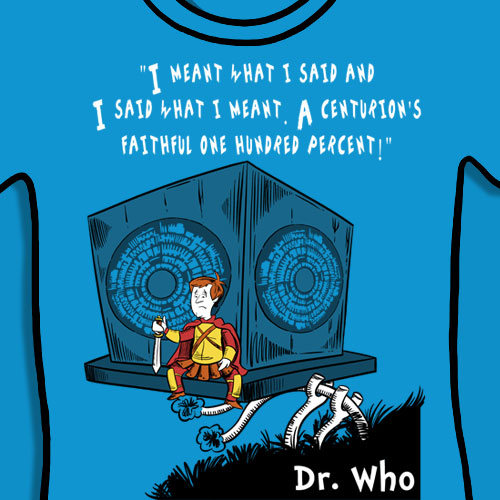 Like all who uncover a conspiracy, I am shocked that more people (as in ALL PEOPLE) aren’t obsessing over it already. I seem to be the only person alive who noticed that Silva, played by Havier Bardem, in Skyfall is just a redressing of Moriarty from the BBC’s Sherlock. It’s not even subtle.

DAMNING SIMILARITIES: Both are consulting criminal masterminds that offer their services to the highest bidder. Both go on and on about how crimes are all committed digitally these days and master hackers are more powerful than armed thugs. Both compare themselves to their enemy as an “equal but opposite.” Both offer to join up with their nemesis to rule the crime world. Both at least pretend to be gay or bisexual (it is unclear whether either character actually is). Both have a silly way of talking. This is probably just Bardem’s accent, but they definitely both have odd inflections and word emphasis.

THE MOST DAMNING SIMILARITY: Silva’s entire capture and and escape from MI6 plays out EXACTLY like Moriarty’s capture and escape from “The Reichenbach Fall” episode from Sherlock series 2. In each the heroes realize just as things start to go wrong (doors open/bank vaults open) that the capture was orchestrated by the villain. Both villains are housed in glass cells in the center of a room. Both villains just sit there all nonchalant waiting for their plans to take effect. Silva might as well have written “Get Bond” on his cell.

None of these points makes Skyfall a necessarily bad movie, but if you’re a Sherlock fan they will certainly take you out of the moment.

Skyfall was actually quite entertaining, but it certainly wasn’t without its shortcomings. First of all, it’s at least 20 minutes too long. There were so many opportunities to trim the fat, but I have to wonder if they left the pacing slow and even at time dull in order to maintain some sort of British cinema sensibility. A few nitpicks: there’s just too much Dench. There’s a decidedly decent dose of Dench and it detracts from the d… movie. Bardem is quite captivating on screen but he doesn’t show up until about halfway through the movie. When it’s over, if you really think about what Silva had built, what his motivation for killing M was and what he eventually lost, it’s pretty much impossible to understand his motivation for going through with it all in the way that he did.

After that list, I’m wondering what I actually liked about Skyfall. I guess I could say when it was moving, when Bond was BEING Bond, it was great. The whole thing at the end where we “catch up” to 1960’s Bond canon (Moneypenny, a male M, the Aston Martin, The Scottish roots, etc) seemed a bit odd at first but really I ended up finding that whole through line charming in a VERY James Bondish way. You’re supposed to take away that these first three Daniel Craig Bond movies are an alternate universe prequel of sorts, where we see Bond becoming the Bond that we met with Sean Connery. I’m not sure how that’s supposed to effect the next sequels, but I take it more of a nudge and wink than a strict re-un-de-also-reboot.

So where does Skyfall fall in the rankings? Certainly better than Quantum of Solace, but not as good as Casino Royale. And the Sherlock stuff goes way past an homage and into straight up plot left.

COMMENTERS: I KNOW I AM NOT CRAZY! ALL THAT SHERLOCK STUFF IS REAL! PLEASE TELL ME YOU SAW IT TOO! TELL ME I’M A GOOD BOY! TELLLLL MEEEEEE!!!!

Also, what did you think of Skyfall? SPOILERS ARE OK in this thread since my entire review was spoilery.
READ COMMENTS AT YOUR OWN RISK!!!