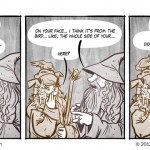 CRUISE FUNDRAISER: 88/100 prints are sold and it would be great to sell that last few remaining prints before the end of the year. I am also going to leave up the additional prints and print packs for sale until probably February in case you want to get in on that action.

I’m just sayin’… that wizard HAD some bird poop on his damn face.

COMMENTERS: Hobbit viewing Fancy Bastards, how did you feel about Radagast’s portrayal in the movie? Too silly?  Too covered in animal excrement? Or just silly enough and covered with the exact right amount of excrement? What about the other changes from the book? I liked that Gandalf tells everyone he believes The Nectromancer is “The Enemy.” The casual movie going audience probably wouldn’t make the connection since it isn’t explicitly stated in the book.

If you want to support HijiNKS ENSUE’s ability to have a merry Santaween and you don’t feel like donating or buying any merch… HELL, why not just check out my Amazon Wishlist? Who’s going to stop you? Not me.