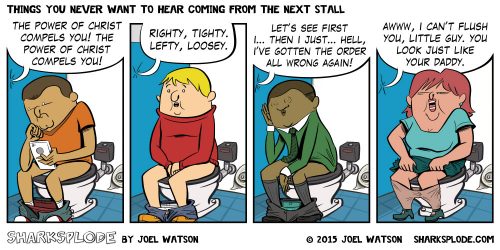 Instead of four panels of crazy nonsense, I should have just written the words, “ANY SOUNDS OF ANY KIND AT ALL,” because that’s truly what I can’t stand to hear coming from the next stall. Any sounds your body makes? Don’t wanna hear ’em. Any grunts, groans or words of self encouragement? No thank you. You taking a phone call mid-act? You’re a garbage person and I STILL don’t want to hear it. The artificial sound of keystrokes as you type out a text? OH MAN I HAVE SO MANY REASONS TO HATE YOU NOW. A) WHY HAVEN’T YOU TURNED OFF THE KEYSTROKE NOISE IN YOUR PHONE SETTINGS?! TWO) WHY ISN’T YOUR PHONE ON SILENT WHEN YOU’RE IN THE BATHROOM?! C) WHY ARE YOU COMMUNICATING WITH PEOPLE WHILE… OK, I can’t fake indignation on that last one, seeing as I am a poop texter myself. Still, all the while my phone and myself are DEAD silent. 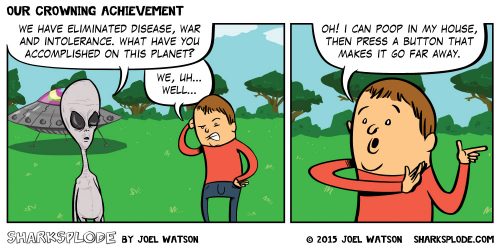 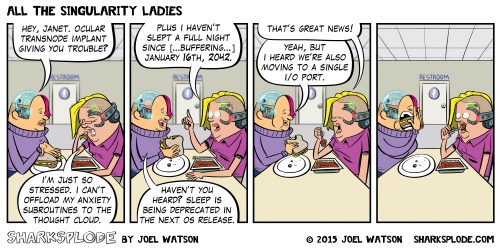 As man and machine become every more closely integrated, keep in mind how only every OTHER iPhone works like it’s supposed to. I’m just saying that I won’t be the one beta testing the new Mind-Wave data interface until they work the bugs out. I’ll let the early adopters find out if their eyeballs get turned to liquid if they accidentally cross into a different timezone, or their intestines get spontaneously ejected when they have background app refresh turned on.

I’m sure the Steve Jobs of the 2040’s (which will probably be a holographic Steve Jobs created from an amalgam of his personal journals, email correspondence and Apple Keynotes) will try to convince the industry that sex organs are just relics of the past and we only cling to them to enforce backwards compatibility with outdated formats. Heheh. Cling. Heheh. Backwards compatibility. 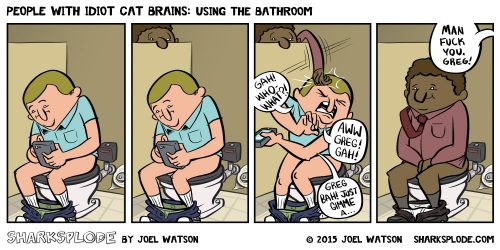 From down the hall their manager, Devon, can he heard furiously clapping his hands and shouting, “HEY! HEY! YOU STOP IT! GREG, YOU GET! GET OFF HIM! LET HIM DO HIS BUS-DAMMIT GREG! GET! GEEIT! You dumb piece of shit, Greg.” 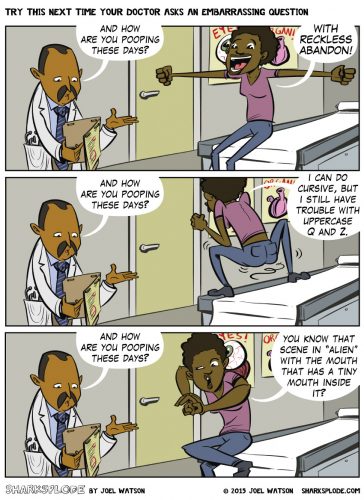 Of course the only proper answer to, “How are you pooping?” is, “Mostly indoors. Mostly.”

I have a STORE that I would like for you to purchase something from. I also have a Patreon and all of the trappings that come with such a thing.

Sometimes I think doctors are trying too hard to be cool with whatever macabre body horror you’re admitting to them. You’re all, “So I just empty out the blood bucket two or three times a day, and it’s been like that for a couple of weeks,” and the doctor replies, “Uh huh, [emphasis on the huh]” or a casual, “Yeah. It’ll do that.” Every once in awhile, it might be more comforting if they let out the occasional, “HOLY SHIT WHAT?!” or “It’s DEFINITELY NOT supposed to do that!” or even “WHAT EVEN PART OF THE BODY IS THAT OH MY JESUS OH MY GOD WHAT IS IT AND WHY ARE YOU SHOWING IT TO ME WHYYYYYYY?!?!?!?”