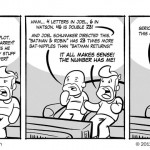 I accidentally watched all of The Number 23 a couple of days ago. I non-accidentally live tweeted it in order to share my confusion and pain with as many human beings as possible. I was made aware of the movie’s horrific curse early on, but still I persevered. SPOILERS: It was truly a massive turd. It was a turd pie. It was a pie made entirely NOT of delicious pie filling and crust, but of turd.

I’m trying out a new, simplified art style for the LoFi comics in hopes that I can bring them back as a regular feature on HE. The goal for the Lofi’s was always to be a supplemental strip that I could bang out in an hour or so vs. the 4-6 hours it takes to make a regular comic. In the end the only difference in complexity was that they were black and white, which honestly took longer than my normal coloring because I couldn’t use the standard color pallet I was used to.

With the new engine driving the backend of the site (thanks Phil!) I should be able to post LoFi’s whenever I want. Even if it’s on the same day as the regular comic. I’m working on having a permanent URL for the most recent Lofi comic (something like hijinksensue.com/lofi). Lofi’s do not show up in the regular archive. You can see a list of all of them HERE. They’ll show up in the regular RSS feed because the idea of multiple feeds seems dumb to me. It’s all funny pictures with funny words. Shouldn’t matter to the reader if the hard was easy or hard on the artist as long as the material is solid.

I’m also hoping to use the Lofi’s as a way to react to something in the world of Geekdom quickly and timely if I’m in the middle of a mini-storyline. Here’s hoping it all works out the way I want.