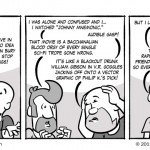 Holy crap in a sack of butts, I had totally forgotten how terrible Johnny Mnemonic was. I mean, I remembered that it was bad, but having not seen it since I was 14, I did not specifically remember that nearly every line was was both written and delivered with equal parts inappropriate intensity and laughable incoherence . And William Gibson actually wrote the screenplay! Aren’t we supposed to like him? I actually find it quite fitting that the first time I saw Johnny… just Johnny, it was on laser disc. A movie about a future that looks like a past that never was on a format of future past that never caught on and totally sucked balls. To be fair, I’m pretty sure I loved it when I was 14 (loved the concept of laser disc too), but after years of reflection and re-evaluation I realized what a colossal cyber-turd it was.

The one thing I appreciate of Keanu Colonic is how accurately it portrayed what 90’s youth expected the future to be like, and just how inaccurate that prediction was. It’s a sort of beautiful symmetry of wrongness. We don’t use clunky V.R. goggles to surf a 3D cyberscape, and we aren’t so addicted to technology that it… [sorry, had to check Twitter] that it… something something. I also appreciate that Ice-T’s character’s name was J-Bone. I like to think that he had a clause in his contracts back then which stated he would only go by “hard sounding” single syllable word + letter of the alphabet combinations. He might have portrayed a car jacker named D-Rock, a crooked undercover cop named Cuff-P or a cellist pimp named F-Hole.

“So get your VCRs ready, ’cause we got what you need.”

COMMENTERS: Feel free to share your memories of Johhny Mnemonic or any other “Future that never was” type of 80’s or 90’s movie. What were you hoping WOULD come to pass from these movies and what are you glad NEVER caught on? Alternately, give me a premise and character name for another Ice-T role using the “word-letter” rules. 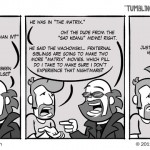 WE FREAKING DID IT! All 150 Ultimate Fancy Editions of Book 2 have been sold. The presale is officially a success. Everyone that preordered a UFE or any other flavor of the book have my utmost gratitude. The order has been placed with the printer and the files will be turned in to them on Monday morning. This means two things: 1) If all goes according to plan the books with debut with me at Emerald City ComicCon in Seattle, WA. 2) My wife and I will be spending the next 48 hours hold up in my office, furiously finishing the book. There may not be a comic on Monday. I say this because, based on the last book, she and I probably won’t actually be sleeping between now and then. 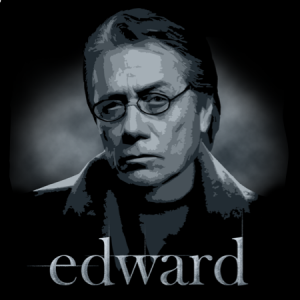 The actual preorder doesn’t end until the books arrive and start shipping, so you can still pick up a regular or artist edition.

Can’t do a real post today since I have witty/sleepy book commentary to write. So I will let you COMMENTERS take over: Keanu says we’re getting a Matrix 4 and 5. You and I both know this is a terrible idea, but for the sake of whatever feel free to play Devil’s Advocate and tell how this could be a good thing for geeks. The realists among you can go into detail as to why these films should never happen. Those of you that don’t give a shit either way, how about coming up with the plot for the films? I assume, to get back in our good graces, they’ll be call the pair The Matrix: Restitution and The Matrix: Reconciliation. Oh crapontoast, I just realized they’re going to call the next one The Matrix: Resurrection. They have to. Damnit. 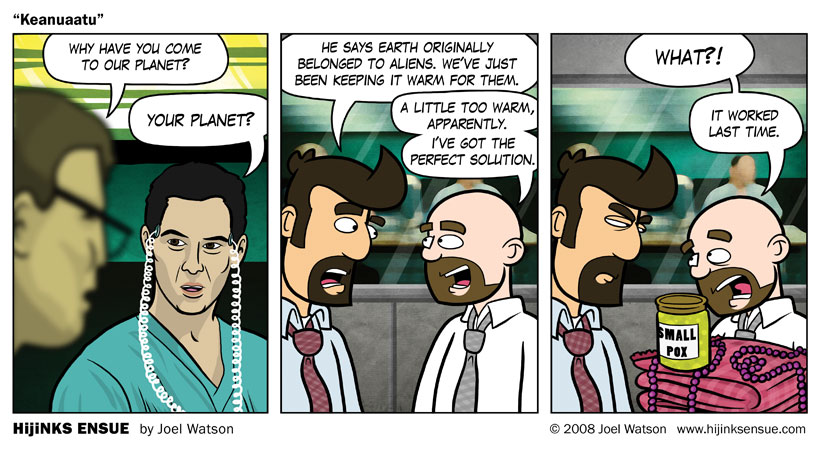 Alternate solution: find out if they are allergic to water or susceptible to germs. Chances are, dirt makes their brains catch fire. Invading alien hordes never seem to the do the research required to properly choose a planet to target.

The trailers for “The Day The Earth Stood Still” certainly give the impression that humanity is doomed due to our shoddy treatment of the earth. It’s safe to say we aren’t getting our security deposit back.

“We didn’t melt those ice caps! They were totally melted when we moved in. It must have been the last tenant. Go find the fucking dinosaurs and ask them what they did to the ice caps. They probably breathed fire all over them. I’m calling the Better Business Bureau and telling all my friends to stay away from your shitty planet!”

I’m sure our cries of “But I drive a Prius!” will fall on deaf alien ears, assuming they have ears and not just cycloptic laser beam eyes.

I’m not a big fan of Kenaanaeux Reeves but I can certainly buy him as an emotionless, wooden alien who’s uncomfortable occupying a human body. I doubt the director ever had to shout, “EMOTE LESS, KEANU!” It just comes naturally to him. Though I do imagine the director got tired of screaming, “ALIENS DON’T SAY “WHOAH,” KEANU!” Regardless, I am looking forward to this movie due to my natural geeky thirst for all things scifi. I hope it’s well executed and entertaining because as sweet as good scifi tastes, bad scifi is like… something that tastes really bad. Like a bad pecan. Have you ever had a bad pecan? You’re happily plowing through a bag of pecans and they are all nutty and awesome and then you bite into a bad one. It’s like drywall, turpentine and pee. That’s what bad scifi is like.

I was starting to get worried that this comic was totally off base and the new movie wasn’t actually about the environment as I had gathered. Luckily, some quick Googling seems to assuage my fears:

I should do this research BEFORE i start drawing.