Rather than trying to recount every single crazy awesome thing that happened at TCAF in Toronto last weekend, I will instead communicate my excitement through photo comics.

This first installment contains the pre-show party at Ryan North’s house. He is the goodest of good people. He opened his home and his fridge to countless wayward cartoonists and we are all better for it. There was actually a bathtub full of beer. I don’t know if this is standard in all Canadian homes of if he went out of his way for us. I have my suspicions.

Featured in the first half of this comic are my favorite comicing girls, Danielle and Angela. They were the first two cartoonists I’d ever hung out with at a con, and the first to make me feel like part of the team. The man stalked by the captain is Chris, and elsewhere in panel 4 are my roommate/travel companion Paul, Bernie, @realitymonster and way off in the back there’s a bit of Anthony.

The second half of the photo comic shenanigans take place at the TCAF after-party hosted by Jeffrey of Topatoco at BMB Karaoke. The pocket monster enthusiasts are Becky and Frank, along with a repete performance from Angela. Frank and I made a pact to sing as many 90’s nu-metal songs as possible that night. Despite the Papa Roach and and System Of  A Down we belted out, I managed to only get video of him singing “Gangsta’s Paradise.” Early in the night Questionable Jeph concocted a plan to bring the house down and queued up “Don’t Stop Believin” so that  it would appear almost last in the rotation. I have video of his performance but I dare not upload it for fear of imploding The Internet. I also have a video of him singing “Enter Sandman” but that’s just for me…. juuussst for meeeee. Also seen in these panels are Sam “Fuzzy” Logan and his fiance Shannon. Sam will factor more into tomorrow’s photo comic when I show you what happened during the actual show. 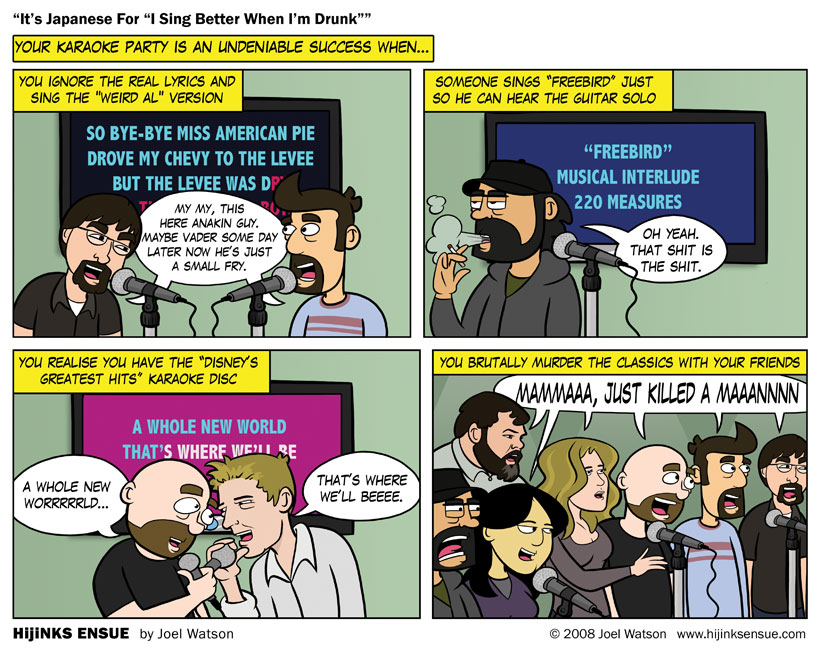 We had a Karaoke party on Saturday for my wife’s birthday. Denise posted the pics here. Most of what you see in the comic actually happened, though the people may have been jumbled around a bit (and a few were left out due to “more people = more drawing” math.

Introductions: The bespectacled fellow in panel 1 is Justin (from Podcast 17ish?) whom I’ve known since we were 6. Panel 3 features Mikey (Josh’s old room mate and writer of the “Brother’s in Arms” games). The guy winning the beard contest in panel 4 is Rick (a coworker of Josh and Eli’s who is, sadly, moving away soon. It was only fitting to memorialize his time in Texas with a comic). And finally in panel 4 you have Jen gently caressing/bad touching Josh. When those two get together you would almost think Josh was straight or Jen was a gay man.

High point of the night was Josh singing “Bare Necessities” from the Jungle Book and realizing the unfortunate homonym in the title. Emphasis on HOMOnym.

The very same Justin in panels 1 and 4 is relaunching his podcast, Gentlenews Live!, tonight at 8:31pm central. Go HERE at that time to watch the live video feed and join in on the chat.