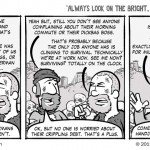 Guys, it is seriously not that bad. We are all up to our eyeballs in freaking skulls here! We’re motherfucking skull-rich! I am going to stand on top of this burned out husk of an SUV and make it rain skulls all over your face. Then we can all go under that bombed overpass and get dry, calloused tugjobs from other dehydrated, starving, desperate shells of former humanity! Then we can… wait, what? All those people were shot and/or set on fire by Hunter Killers like seven minutes ago? No sweat, post apocalyp-bros! We’ll just move this party to the abandoned mine shaft where we dump the hundred and hundreds of dead bodies we come upon every day! PARTYPARTYPARTY!

I have to admit though, we can’t carry on like this forever. The plentitude of bleached skulls is going to lead to inflation and eventually total economic collapse. You’ll know it’s getting bad when the same rub out/possum hot dog combo deal you used to pay two skulls for now goes for thirty. And I’m not talking child skulls either. I mean thirty full sized man skulls! It’s like the machines think they have a license to print skulls.

COMMENTERS: Let’s keep looking on the bright side of this whole Judgement Day thing. What else would be a positive outcome from the machine-ocalypse?