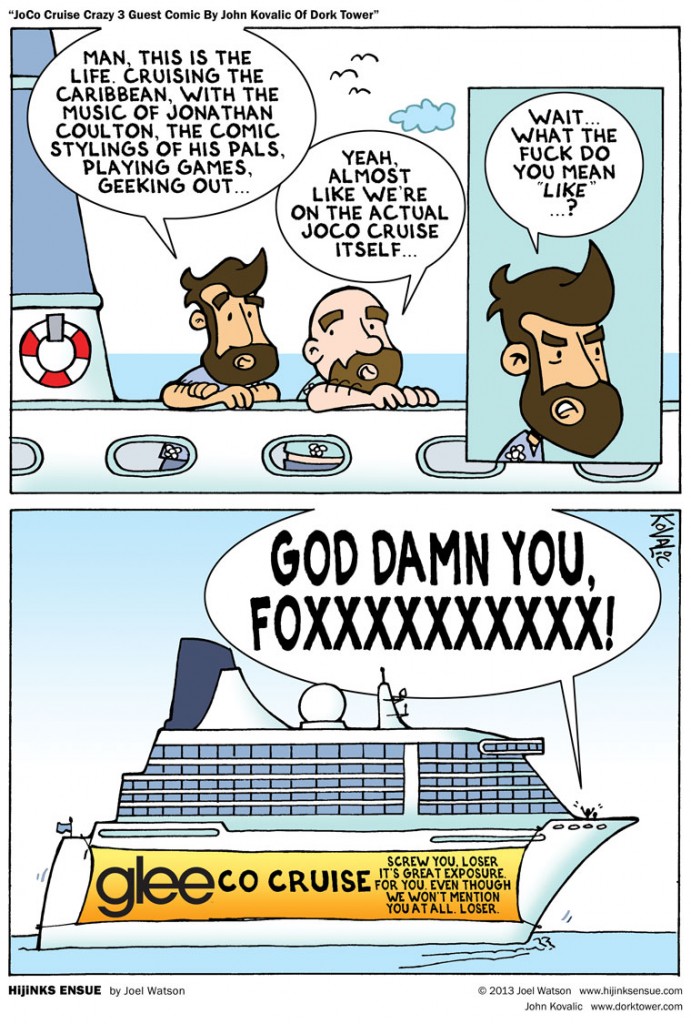 JoCo Cruise Crazy 3 Guest Fortnight is dead in the water! No power, no food and plenty of sea-wage backed up  into the staterooms, we’re now being towed back to port by a pod of friendly humpback whales. I’ve decided to cut the Guest Fortnight a bit short (you will still see the 2 additional guest comics when I head out to Seattle for Emerald City Comicon in a couple of weeks), since coming home from the JoCo Cruise has left me creatively charged and I am anxious to get back to work.

A weird thing happened when I put out the call for guest comics a few weeks back. Actually two weird things. First, nearly everyone I asked said yes. I usually ask for at least twice as many guest artists as I need expecting plenty of no’s. This time around the no’s were not to be found and the fantastic comics just kept hitting my inbox. The second weird thing is that three of the artists had THE EXACT SAME IDEA and turned in their comics at roughly the EXACT SAME TIME. It was obvious that a certain topic (one regarding folk covers of songs about butts and television networks drunk with power and copious legal council) was on a lot of peoples’ minds and ready to be made fun of in comic’d form. I’m going to post all three of these comics in a row so you can see how three fantastic comic artists interpret the same idea. They’re all great and come at the subject from a different angle.

The first offering this week is from John Kovalic of Dork Tower, Munchkin, Apples To Apples and SO MUCH MORE quality geekery. John and I spent most of the last couple of years just barely missing each other at cons and other geek gatherings. Finally, at last year’s SDCC and the ensuing W00tstock, we had a chance to sit down and talk (for maybe 5 minutes). Needless to say, we need to have more adventures in the very near future because he’s a hell of a nice guy and a fine cartoonist with a geek-cred-resume a hundred miles long.

COMMENTERS: Have you ever gone on a “bait and switch” trip, vacation, conference, convention, etc? My wife and I took an all inclusive resort trip to Puerta Vallarta back in 2006. This was before we drank and it turned out that drinking was essentially the only this this particular resort offered. I guess the idea was to keep everyone so drunk that they didn’t care that the food, amenities, entertainment, excursions and ALL OF THE REST OF PUERTA VALLARTA were terrible.