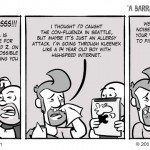 Here’s a comic that is based on events so true, that to deny them would be to deny the fountain of mucus that is my head. DO NOT DENY IT! I must have some sort of baby blackhole in my sinus cavity that connects to a parallel universe made up entirely of sneeze-based lifeforms. If that last few days are any indication, their entire snot armada has entered our realm and soon we will be building nose-shaped sarcophagi for them to inhabit as they enslave the people of earth. I was positive that I had contracted a con-bug from Emerald City Comicon, especially after hearing that David Willis caught bronchitis. Every time I turned around that weekend he was either spitting into my coffee, licking my food or injecting me with vials of his own blood. Weird guy, that one. Now, I’m starting to think that I wasn’t sick at all and my allergies have leveled up. They’re like a 7th level Chaotic Evil Pollen Ragweed Mage that only rolls 20’s.

I am feeling slightly better today, so hopefully I will only be slightly leaking by the time I leave for Chicago on Thursday. My goal is to give you at least 1 more regular HE comic before I leave, then 2 awesome guest comics, followed by a regular HE, and maybe a LoFi to round out the week. As usual, the monday after a con will probably feature a series of con-sketches. 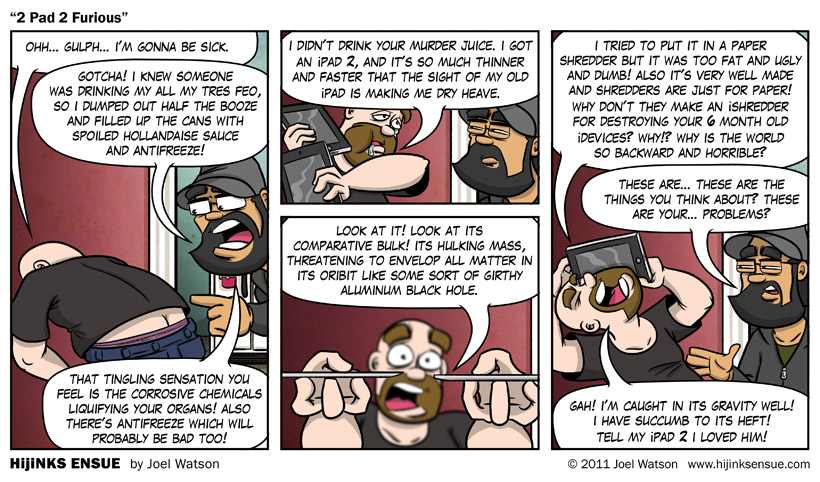 C2E2 IN CHICAGO IS NEXT WEEKEND!!! I will be there with Randy, Danielle and David!

Josh IRL picked up an iPad 2 today and he’s already looking for ways to not just dispose of, but humiliate its predecessor. I feel like if there were a way to pants an iPAd in front of the girl it liked, Josh would do just that.

Commenters: What can Josh do with his old iPad? Fold it in half and use it as a stand for his iPad 2? Cram it under his tires for traction when he gets stuck in the mud? World’s tiniest and most expensive toboggan? YOU DECIDE! 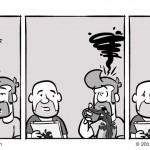 MEEEEDLY MEEEEEDLY SQUEEEEEEEEE!!!!!
ALL NEW REDESIGNED “AND MY AXE” SHIRTS ARE IN THE STORE!

NEW HE Podcast Episode 80: Medium Seabiscuit [or is it Sexbiscuit?]

CONVENTION UPDATE: I will be at The Toronto Comics And Arts Festival May 7-8 after all, and I will also be at Connecticon July 9-11.

BOOK UPDATE: The giant, frost bitten pallet of HE Book 2‘s arrived at my house on Wednesday. I’ll start shipping books when I get back from ECCC. Non-artist edition books will ship first, followed by non-artist UFE’s (still waiting on some of the goodies like stickers and buttons to arrive), followed by all artist editions. I have at least 200 books to sketch, so please be forgiving when it comes to delivery times.

Ok, don’t look at me like that. Josh came up with this and I just wanted to make sure you all knew what a monster he was. Now that you know… what he is… just don’t look him directly in the eyes if you ever meet him. Because I assure you, the thing looking back will chill you to the core. It’s like staring into the soulless eyes of a shark with cataracts. Or maybe a raccoon. Either way it’s some sobering shit. The temperature in the room will drop 10 degrees, then it will rise because you just peed yourself. He’s a monster. A monster.

COMMENTERS: So hows about that spanky new iPad 2, eh? That mobile Garageband is giving me dangerous thoughts. One might even say IDEAS. Ooooohhhhh…. ideeeeeaaaaaasssss….