I read about some science that happened last week and figured while everyone was all “SUPER HAPPY HOORAY SCIENCE!” at least one guy was probably still all “BOOO SCIENCE! BOOOOO!”

I know comics have been sparse for the last week. I’ve been working on some updates to the website, which has taken up quite a bit of my mental and physical resources for the last few days. Even though the comics are the main thing you come here for, the website is the cage that holds them. And, as anyone who’s ever tried to put something in a cage can tell you, that cage better be ship shape before you start putting people in it… things… things go in cages. Or animals. Never unsuspecting motel guests…

You may notice that the site is now 3 columns instead of two, and the comic area is much larger. Going forward I’m going to be posting the comics at 1000px wide instead of 820px. That might seem like a small change, but I think it really makes a difference in how pretty the art is. The rest of the stuff I’ve spent 12 hours a day working on will be imperceptible to you unless it breaks. Is this what it’s like to work in IT? No one notices your work unless something breaks? Guys, that sounds awful. You Fancy Coding Bastards should call each and every one of your clients ever single day and tell them, “Your shit still works. You’re welcome.”

COMMENTERS: So I guess we’re pretty close to understanding why stuff has mass. Neat. What’s your favorite (not necessarily the most important or life changing, just your favorite) scientific discovery? I don’t mean inventions and what not. I mean, “We used to think it was this way, but now we know it’s THIS way,” type of situation. Which one do you think caused the most shake up in the average person’s daily life? Which was the hardest to accept? 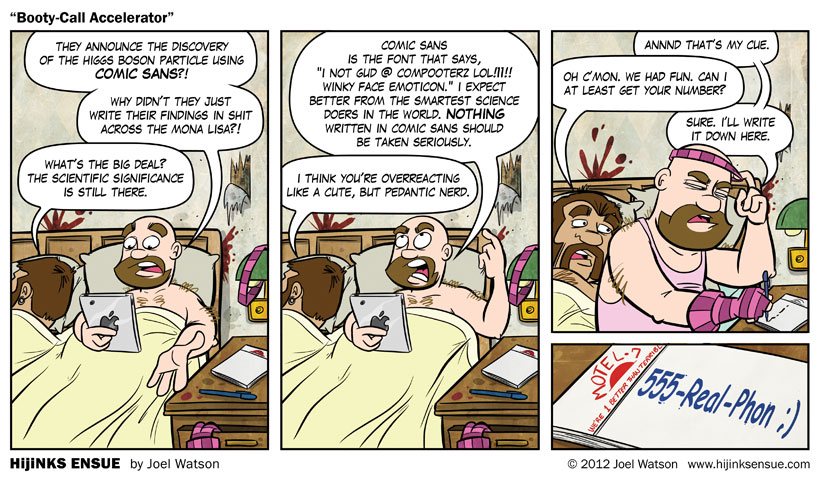