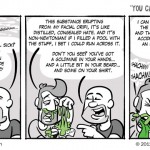 Sorry for the lack of comics last week, but the above panels pretty accurately (and rather unfortunately) illustrate what my life has been like for  7 or 8 days now. I thought I was just getting an allergy attack, but after several days it seems to have gained a malicious sentience and begun a full scale assault against my ability to not feel like a giant pile of undulating grossness. I assume that came across in the tone of the comic.

I made the terrible mistake a few days ago of thinking, “I’m starting to feel a little less shitty, so I should get out of the house and have some fun!” I might as well have injected monkey pox straight into my eyeball. After my prematurely celebratory Friday night out I not only went back to sickness square one, but I seem to have super charged my cold/sinus infection/techno-organic anti-life virus into overdrive. Now, I’m basically sleeping all day and only waking every 12 hours or so to drain my face into a bucket. A sadness bucket. A sadness bucket full of hateful face juice. I am not kidding when I say this shit resembles Nickelodeon Gak in both color and consistency. I am scared that if I went to a doctor they would turn me over to the government, who would permanently detain me in an undisclosed location and harvest my mucus for spaceship fuel. Or at least industrial comet polish.

Ok, enough gross out, health related nonsense. When I was a kid I had a tub of Gak. I remember it smelling like burnt tires and carcinogens. It just reeked of petroleum and poison. I always wondered if the unpleasant odor lead them to develop “Smell My Gak.” I never saw that particular variation up close and personal, but I find it hard to believe that the “hot dog” scented variety was an improvement over the original recipe. I also get the impression that “Glow In The Dark Gak” was simply them giving up on trying to make Gak NOT glow in the dark. Like they had exhausted the world’s supply of cadmium attempting to mask Gak’s natural radioactive properties, so they had to introduce it as a feature.

I had grown too old for amorphous weaponized chemical gel-based non-toys by the time Floam and Sqand were introduced. I didn’t even realize that the “Here, kid, play with this biproduct of an industrial accident,” trend continued with products such as Smud, Gooze, Skweeez (with three E’s), and Zzand. SPUMG seems to fall right in line with these fine products. It’s terrible, it smells bad, it tastes worse, it’s is most definitely poisonous and you DO NOT WANT TO KNOW HOW IT IS MADE.

COMMENTERS: Continue the Nickelodeon product line! All you need is a few odd consonants and an improperly placed vowel or twelve. Something like SKROBZ. What does SKROBZ look like? How terrible does it feel? What is it supposed to do and HOW TERRIBLE DOES IT FEEL? Did you own any of the actual NICK family of chemical warfare play things? I had a GAK inflator. One time I made a stop motion movie using my friend’s camcorder of the GAK crawling out of its tub, oozing over to the inflator, blowing itself up then popping. In retrospect, I wonder if it was actually stop motion, or if I had simply managed to video the moment it became self aware.