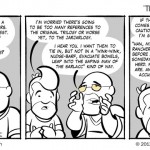 I am not 100% opposed to Han Solo or Boba Fett origin stories, but of the Star Wars EU (novels, video games, comics, etc) has taught us anything, it’s that theirs quite literally AN ENTIRE GALAXY of stories to tell without rehashing old tropes and characters. I’d love to see an original character, set in the Star Wars universe that just has, oh I don’t know, a great story. I feel like the entire purpose of the prequels was to answer questions that no one was really asking. Sure, we wanted to know what exactly turned Vader evil and how he got in the robot suit, but that was about it. One prequel movie (written by ANYONE but George Lucas) could have handled that story expertly and done it as a subplot of a much larger original story. I don’t care to see 20 minutes of how Han and Chewie met or how Han had previous encounters with characters we already know. That’s garbage story telling. Where’s the Kyle Katarn movie? Where’s the KOTOR movie? Disney, let’s move in that direction before we find out how young Boba Fett dealt with the death of his father and eventually bought a defective jetpack from PROBABLY WATTO (you monsters).

Big thanks to my buddy Stepto for inspiring this comic with his tweetings. You should go buy his new comedy album “A Geekster’s Paradise.” That is, if you enjoy laughing. Otherwise go buy a bunch of rocks and jam them into your face or whatever people that don’t enjoy laughing do.

COMMENTERS: What area of the Star Wars universe would you most like to see explored in new stand alone movies? Since it’s going to happen anyway, who would you cast in the young Han Solo movie?