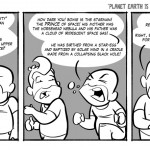 Recording a music video of Bowie’s “Space Oddity” IN OUTER MOTHER FUCKING SPACE is mankind’s most baller achievement. Hats off… rather space helmets off to you, Commander Hadfield. Though I do fear his actions will usher in the coming Anime Apocalypse by creating the universe’s first actual outer space pop star. Alls I’m saying is when a cyborg cat-girl from the future and a plucky robot sidekick with plasma cannons for arms start doing backup vocals for the good Commander, don’t say I didn’t warn you.

COMMETNERS: What song would you have to sing at what location/time/historical event to approach the epicness of Commander Hadfield’s performance?

Did not read that as “facing” the first time. Not sure where my brain pulled a “k” from, either.

Twould be epic, though.

I would think the Doctor’s favorite Bowie song would be “Changes”.
Block IPDelete
Reply

I was reluctant to watch the video when I first saw it, because it sounded so gimmicky. But honestly, it was very affecting. And to me, the most important part was that he could really sing! As Josh points out, he’s no David Bowie, but he does manage not to completely pale in comparison, which I consider quite an achievement.
Block IPDelete
Reply

No, Jeff Bridges is The Dude.
Block IPDelete
Reply

If there is ever a manned mission to Mars, its theme song will naturally have to be Hagar’s “Marching to Mars.”
Block IPDelete
Reply

Did you see the duet with Ed from Barenaked Ladies? “ISS (Is Someone Singing).” That one made me tear up a little.

Fun fact: When I was little, I confused Dave Bowman from “2001: A Space Odyssey” with David Bowie because their names are similar and also all the stuff about space and stars.

I’d give my left nut to see C3P0 sing Domo Arigato Mr Roboto in front of a WalMart.

And then say “I’ve wasted my left nut!”

That guy’s song is great! It even got David Bowie’s approval on Twitter! And since it’s Bowie related, expect it to be a punch line in a joke on The Venture Brothers any day now.
Block IPDelete