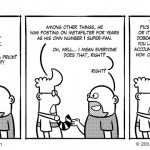 UPDATE 4/28/11: Some of you are upset that I’ve taken this position. Let me assure you that I wasn’t trying to just jump on the “hate Scott Adams” bandwagon. I read what he wrote and I thought it was in REALLY poor taste. Sure it may have been out of context or intended for a certain audience, but unfortunately he posted it on the Internet for everyone to see. And regarding the whole “sock-puppet #1 Fan” thing, I don’t think he’s a horrible creep for doing that. Just a regular creep. The mentality of “time to go do my daily defending of myself on the Internet using a different identity” is just a lame, sad activity. I feel bad for him honestly. He might actually be a happier guy if he had a smaller niche audience. Then he really could just talk to one subset of people that understood his comments towards women weren’t as misogynist as they sounded. I certainly know what it is to say something outrageous for comedic effect, knowing good and well I don’t really feel that way. But if I got called out on something like that on such a grand scale I would apologize and move on. Just my thoughts on the matter. Maybe I came off as too harsh. Maybe I’m not familiar enough with the subject matter. I am willing to concede that. I have also toned down some of the language in the post below to be more in line with how I actually feel and less outrageous. I should also point out that all I really wanted to do was use the “posting about yourself on forums” aspect of the story to make a joke about Josh doing the same thing. That’s why over 2/3 of the comic deals with that aspect and not with Adams.

I guess Scott Adams is kind of like the Michael Richards of cartoonists. If he could have just kept his mouth shut, he would have faded into reasonably likable obscurity. Now we have the unfortunate burden of knowing that he’s a bit of a misogynist, and egomaniac.

These days I don’t find Dilbert inspiring, or entertaining. It’s about as base as comics get (hell, it was nearly impossible to try to mimic Adams’ completely rigid and emotionless drawing style for the comic above), which doesn’t suit my tastes. When I was an adolescent I did look up to Adams, though. He was spreading nerd culture to the masses just as I was learning to take apart computers, and he was able to leave his IT career and turn his hobby (passion?) into his job. Both admirable feats, in my mind.

I even had a newfound respect for him a few years ago when I learned about him permanently losing his voice, then retraining his brain to speak as if he was singing (he had to trick his brain or else it would not let him speak). I just thought that was a cool thing to do, and a nice little story about not giving up, etc, etc. Now I have a harder time respecting the guy. Seems like he’s a little full of himself and reacts poorly when cornered (though, I may have done the same in his place. Who knows?) The safest bet would have just been to apologize and move on.