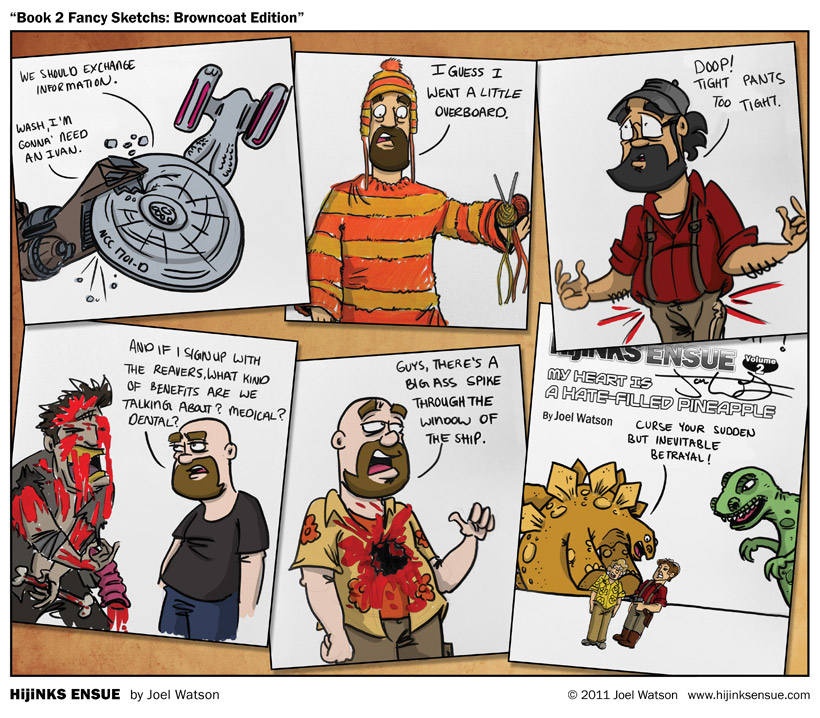 CONVENTION NEWS: Connecticon is next weekend!!!. Holy crap. Come see me and David and Ryan and Lar and the Explosm quadruplets and much many mores!

I. HAVE. FINISHED. SKETCHING. ULTIMATE FANCY EDITIONS!!!! And only several months later than I had intended! If you are expecting a UFE Book 2, it will be in the mail today, assuming the mail is running today [July 1,2011]. I sketched 16 books today, so instead of making a comic, I have assembled for you some choice selections from those sketches, colored them and even organized them into a theme! I’d say at least a 3rd of my Book 2 sketch requests said, “draw something Firefly related.” This comic was bascially founded on Browncoatishness, and I often regret not having more reasons to draw Captain Mal and his crew of misfit space peoples. I try to keep HE topical and there just isn’t much new Firefly/Serenity type stuff happening these days. What I’m trying to say is I enjoyed drawing these and I hope you enjoy reading them. I also hope the owners of the books these sketches are attached to will enjoy owning them.

The final sketch, “Reverse Dino Betrayal,” was auctioned off for the Toronto Can’t Stop The Serenity event. I might make that idea into a shirt. What do you think?

MUSIC NEWS: My friend Tom Brislin has started a Kickstarter to raise money to record his first solo album. Fans of the HE Podcast will know his music from… the HE Podcast. Tom is a fantastic song writer, a virtuoso piano player and one of my favorite creative people on the planet. Please back his project so that I may hear the wonderful musics that are currently stuck in his brain.

Has it been too long since you saw “Serenity” in the theater? Unless you saw it earlier today, the answer is yes. 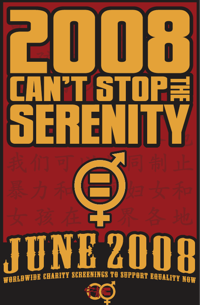 Can’t Stop the Serenity is organizing viewing of the BDM to benefit Equality Now. Any Dallas area FB’s can catch it June 22 at the Studio Movie Grill, Dallas at 1pm. Tim Minear‘s going to be there.