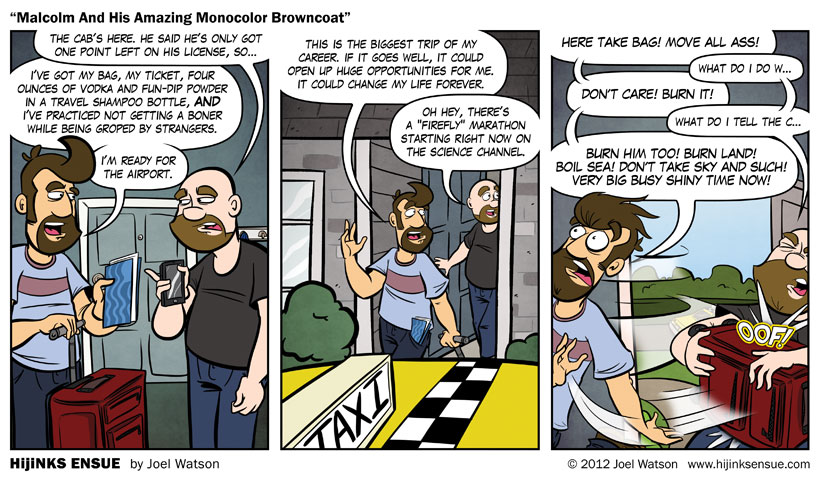 Last night I tuned into the Firefly 10th anniversary marathon on the Science Channel somewhere around hour 3. I didn’t get up from the spot I was in for the next 12 hours. I really hadn’t watched the entire series since the DVD’s came out. I was gifted the Blu Rays for my birthday by a generous Fancy Bastard, but I had yet to break them out and it seemed like 10 years was far too long to have waited. It also seemed like an impossible amount of time to have passed since they did, in fact, take the sky from me.

Also, pretty much all HE shirts are back in stock size-wise for your holiday shopping enjoyment.

One thing that always catches me off guard about Firefly is that all the tropes and memes and catch phrases are things that were used, shown or said just once in the series. Everything the nerds glommed onto, from Jayne hats, to strawberries, to tight pants, to problematic food were just one off gags in single episodes. I think this is a testament to two things: A) the show was so well crafted that everything about it felt pre-established upon the first viewing. The world, the ‘Verse Firefly presented us with was already fully realized, even as it was unfolding before us bit by bit. To the audience it really felt like peeking in to something very old (in terms of development) and very real. And B) With only 15 hours of tv content and a eventually an added 2 hours of movie to obsessively analyze, nerds did what they do best and… obsessively analyzed the limited resources at their disposal.

After the marathon Science showed a partial cast reunion roundtable that took place just before the big Firefly panel at Comicon this year. Interviews with the missing cast members (excluding Ron Glass if I remember correctly) were spliced in. It was touching to hear how the palpable sense of demise pushed them to make the show even better, rather than causing them to sleepwalk through the episodes with a sense of gloom and defeat. Joss’s tear jerking speech to the San Diego crowd at the end was just that. An eye misting declaration of gratitude if their ever was one.

A couple of things I wasn’t expecting were the final revelation of why Inara had to leave Serenity and why she refused to allow herself to love Mal, and a deeper explanation of what Inara’s “magic” syringe was intended for. I know they explained it in the DVD commentary, but after hearing Tim Minear layout what the episode would have really entailed, I can’t think of anything darker that has ever appeared on a tv drama. Not even Breaking Bad could have touched that plot line.

As I write this post, I am listening to “King Animal,” the first new Soundgarden album in 13 years. Firefly and Soundgarden – early 20’s me is in full effect right now. This far removed from the cancellation, the outrage the fruitless online petitions and the shocking lack of fairness of it all, I think I would really appreciate an animated series right about now. So… let’s go ahead and make that a real thing.

I have a guest comic up at Wasted Talent concerning TRUE CANADIAN ADVENTURES!!! 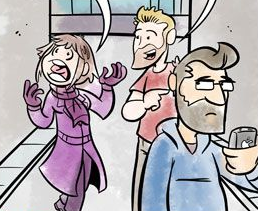 COMMENTERS: Did you watch the Firefly marathon? Is there anything that you’ve caught 10 years later that you missed during the initial viewing? Or did you discover Firefly long after it was axed? 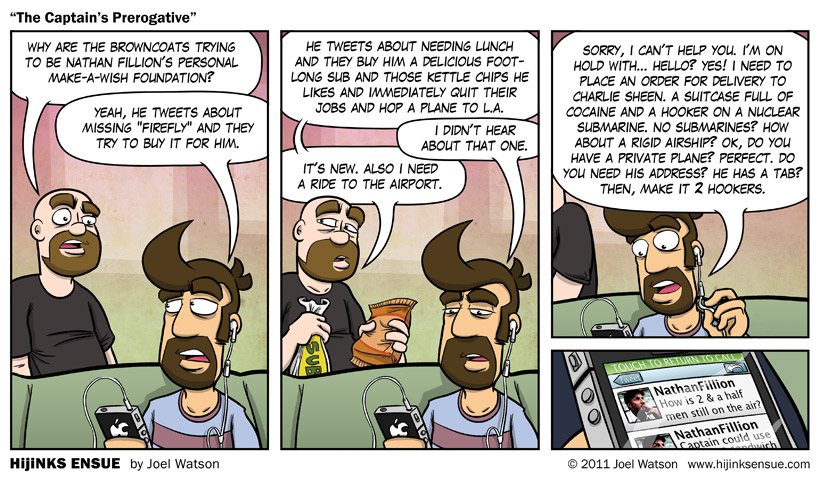 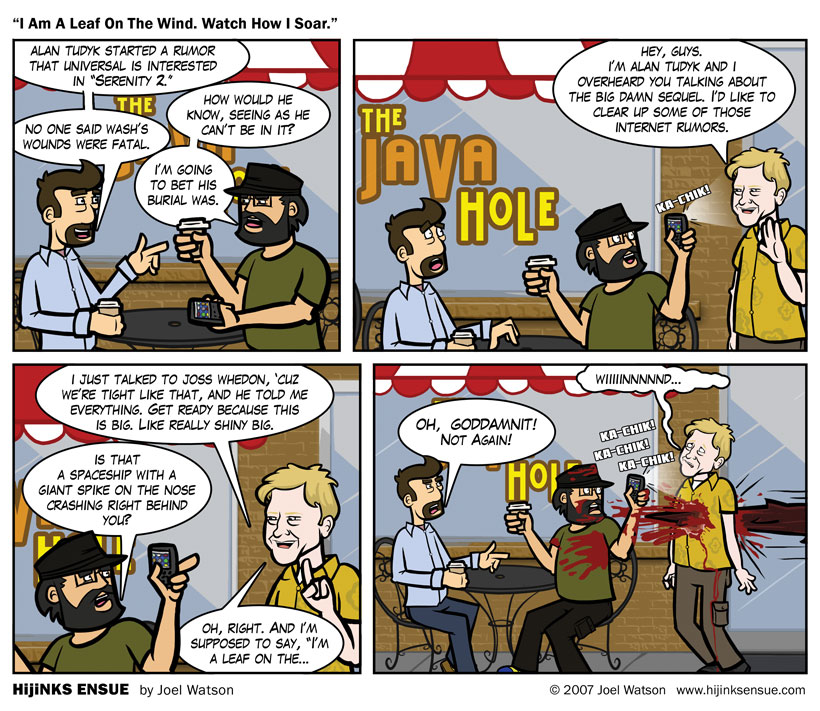 Eli still hasn’t washed that shirt. Get it? Washed?

Quick post today, so I can get back to toiling in the pixel mines. Alan Tudyk is known for being a gossip and a trouble maker, and a generally cantankerous individual. So it’s no wonder he is out there in Hollywood spreading vicious rumors of a Serenity Sequel (that’s BDS to you of the brown coated persuasion). Actually he’s a very talented and gracious man. My wife and I met him in New York a couple of years ago and I was thoroughly impressed with his treatment of random fans on the street. Also he can sing.

Just as I was about to support the cuase and buy a gross of the Serenity: Collectors Edition DVD’s, I found out that it all may have been a misunderstanding. He might have been talking about “another one” as in “another collectors DVD.”

Keep your fingers crossed and your psychopath/telepath combat-conditioned sisters medicated. If we all buy 40 or 50 Serenity DVD’s we might get a new movie. Remember, they can’t take the sky from us… except that they did.

I’m in the process of launching an HE store (shirts, etc). Anyone have advice for a shirt printing service other than CafePress? I hear tell they are teh bitches.

Also, anyone want a desktop background with Joel and Eli sitting at the coffee shop? I have a nice hi-res version of that I could work up into a couple of different res’s.