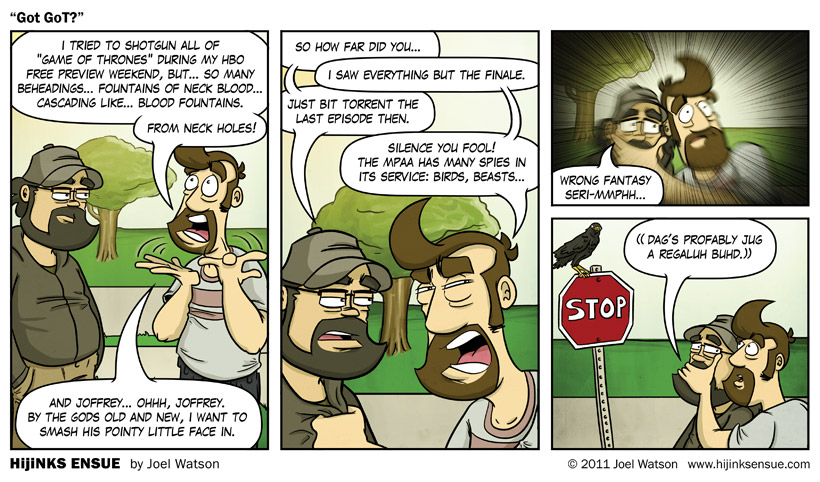 My Friend Lar saw this shirt and drew THIS. It’s amazingly wonderful.

Anybody hear about this Game Of Thrones show? No? I guess it sort of flew under the radar, because people haven’t been talking about it on the Internet non-stop for months and months or anything.

I had been purposefully ignoring the glowing reviews of Game Of Thrones because I didn’t have HBO and I didn’t want to bother trying to acquire the show through other means. As I get older I look at every Torrent and ask myself, “Is this hour of entertainment going to be the one that costs me a $35,000 settlement?” I am old.

When I noticed an HBO free preview weekend on my HD Fiber TVmawhosits I hoped I might luck into a GoT marathon that I could record for later viewing at my leisure. Alas, there was no such marathon, but the entire series was available via On Demand. I had a very important decision to make. The free preview only lasted another 26 hours, and there were 10 one hour episodes to devour. In order to consume a media-meal this large I would have to forsake all other responsibilities. Sleep, work, my family, all liabilities that were keeping me from being caught up on the new thing all the Internet kids are Internetting about. “Eff it! I’m going for it!” And for it go I did… go.

I was surprised how little the show resembled Lord Of the Rings in tone. LoTR is very grand. The scope of the story, the settings and the characters are equally vast. GoT is almost the opposite. Instead of an epic struggle against ultimate evil for the fate of the world, GoT focusses on about 40 characters internal struggle to “get theirs.” The story masquerades as grand because there are kings and castles and knights and wars and talk of dragons, but it is actually very small and very human. It’s a tale of selfishness and petty jealously. The only great evil resides in the schemes and machinations of nearly every characters in the show. They’re all just terrible people (except for most of the Starks).

One thing I find confusing about the series (and the books too, I suppose) is the fact that [SPOILERS] nearly everyone dies. Like everyone. Just as you are saying to yourself, ” Oh man, if that guy gets to do the thing he wants to do, it’s totally going to fuck up the things those other guys want to do,” he dies. Then the other guys die. Major plot threads just build and fizzle due to character death. I understand this is Martin’s thing and all, but it’s… jarring? [/SPOILERS] Regardless I really enjoyed the series and look forward to season two. I might even sign up for HBO for a few months just to watch it in real time. Though I admit, seeing 5 eps back to back was SO much more satisfying than waiting week to week. Also, Peter Dinklage fucking rules.

Anyway, here are some GoT greeting cards slogans I made up on Twitter:

“Congrats Graduate! Once you take The Black, you never go back… to having sex.”

MUSIC!: My friend Tom Brislin has started a Kickstarter to raise money to record his first solo album. Fans of the HE Podcast will know his music from… the HE Podcast. Tom is a fantastic song writer, a virtuoso piano player and one of my favorite creative people on the planet. Please back his project so that I may hear the wonderful musics that are currently stuck in his brain.

COMMENTERS: Feel free to post your SPOILER FREE thoughts on Game Of Thrones or make up your own G0T greeting card slogans. 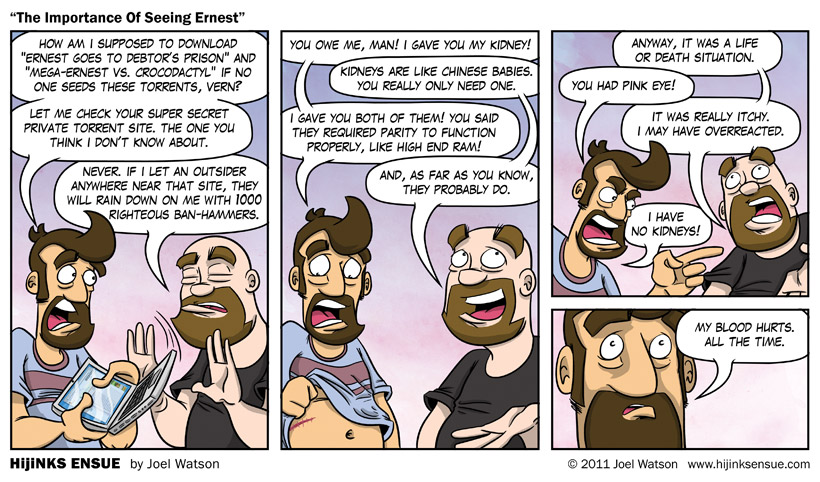