OH COME ON! That’s no fun! I thought Walter White would have made a great Lex Luthor. Can he at least be Darkseid? He could cook up the Anti-Life Equation in an old RV in Space. Hell, New Mexico is practically Apokolips already. Just open fire pits and lava geysers everywhere.

I will be participating in this Bumbershoot panel series this weekend! 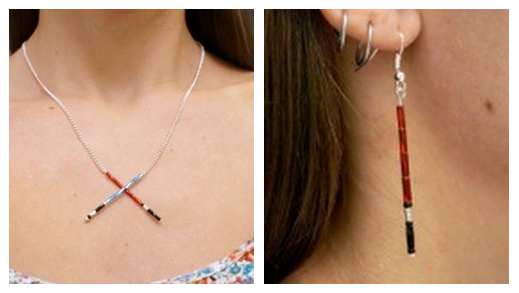 COMMENTERS: Who would you like to see play Lex Luthor? Alternately, make up some more headlines from this “reputable movie news” site.

ooh how about a Jeff Bridges as Lex Luthor. anyone? come on it works both ways. we could get a serious “Obidiah Stainesk” Luthor if the movie is good. or if the movie blows (and it’s going to) we could have a “The Dude” Luthor. either way it has to work. right?
Block IPDelete
Reply

I believe you’ve got that backwards
Block IPDelete
Reply

He actually did play Gordon in the Batman: Year One animated movie.
Block IPDelete
Reply

And that was possibly the most bad-ass Gordon to ever hit a screen of any size.
Block IPDelete
Reply

I would like to see John Malkovich as Lex Luthor.
Block IPDelete
Reply

John…
Wait for it…

Is it ok that I get all my geek worthy news from your comics? Without HE I would have to actually read the internets.
Block IPDelete
Reply

Im happy to be your filter.
EditDelete
Reply

While in Toronto last weekend, I only had internet access late and night and early in the morning. I went to the con on Thursday and lived my life in this weird information void where news could only be transmitted from human to human, or Canadian to human directly. With words. Actual mouth words. It was a slow and cumbersome analog form of communication that allowed WAY more than 140 characters. Still, not a single Internet wielding Canadian saw fit to fill me in on the day’s significant development in the world of cinematic geekery. When I got back to Andrew’s house that night I connected with his wifi, exhaled in a way that felt as if I had been holding my breath for 12 hours and asked Twitter if anything happened while I was gone.

The news poured out of my phone like a tsunami of nerd rage. “AFFLECK IS BATMAN!!! WHAT DOES ANYTHING EVEN MEAN ANYMORE?! DO WE STILL HAVE A GOVERNMENT?! A WORLD?! CAN MATT DAMON BE NIGHTWING BECAUSE THAT WOULD BE PRETTY SWEET?!?!” I popped out a few sarcastically outraged tweets (which, come the next morning, would have gained some popularity), and went to bed fairly confident that this casting revelation was, in several words, extremely very bad news.

Over the next couple of days I saw a ton of hate online directed toward Batfleck. “He’s going to ruin Batman like he ruined Daredevil!” “Ben Affleck is great in somethings and bad in others! How can he Batman if not perfect always!?”  “Gigli was a movie that made me throw up with anger and he was in that movie and he didn’t help me clean up the throw up!” A pattern was becoming apparent. The reactions all smelled of nerd fear. Nerd fear is different than nerd rage. Nerd fear comes from a place of hurt. Of past betrayal. Batman movies have been unkind to nerds (and humanity in general) in the past, and nerds were afraid again that Batman (a character who has been elevated via cinema over the last almost-decade) was about to betray them again.

My initial, honest, snark free reaction was, “It’s Bat-Clooney all over again! This guy is Hollywood royalty, he LOOKS just like Bruce Wayne ought to look and he has NO BUSINESS playing the ACTUAL Batman.” Then I realized that this Batman movie was ACTUALLY a Superman movie. More accurately a sequel to Man of Steel. A movie that was pretty god damn terrible, all things considered. Those things being !!!SPOILERS AHEAD!!!  the story, the completely unnecessary way Pa Kent dies, the desolation of Metropolis at the hands of Superman himself, the character assassination of Superman at the hands of Superman himself in that he used those hands to assassinate Zod and toss his entire what-Superman-is-all-about deal out the window, the fact that America and the world do not consider him an uncontrollable threat and banish him from Earth at the end, the story, the writing, the story… I could go on. !!!END SPOILERS!!!

Affleck might actually be the best possible thing to happen to a Superman franchise that, so far, has left me hating their Superman. And Bryan Cranston as Lex Luthor? This is a performance I have got to see. Talk about being in the “empire business.”

COMMENTERS: How do you feel about the Batfleck casting? If not him, then who? Well, OF COURSE Jon Hamm, but who else? Just Jon Hamm? Really? Ok, you’re right. He should ALSO play Superman because he should have all along, you say? Man, you are a smart person.

I could see Patrick Wilson doing a bang up job as the caped crusader.
Block IPDelete
Reply

I thought Michael Keaton was an awful choice to play a superhero but once he was covered in the bat suit, it was fine. And I enjoyed him in both movies.
So Ben can be the next Batman. If he stinks, they’ll be plenty more Batman’s to come! 😉
Block IPDelete
Reply

My thoughts exactly. And if it ends up being Bat-Clooney all over again, well. At least we will be laughing. Don’t let the bad movies hurt your fan-feelings, it’s not healthy.
Block IPDelete
Reply

With the understanding that this is a Superman movie, not a Batman movie, Bats is going to be a supporting player. Or not: they apparently haven’t written the script yet.
Block IPDelete
Reply

It is the Batman/ Bond law of casting: fans are pessimistic whiny-pantses about the choice, until the movie comes out and everyone has a joygasm.
Block IPDelete
Reply

I still remember the tsunami of rage when Heath Ledger was announced as the Joker. No teen heartthrob could possibly portray the Clown Prince of Crime!!

Except then he turned in (IMO) the very best live-action Joker *ever*. (I haven’t yet decided if Ledger’s Joker was better than the animated Joker voiced by Mark Hamill, speaking of people you never would have guessed would be excellent in a role.)

Personally I don’t really care all that much about the batfleck casting. While Batman and associated characters are in my opinion the best thing DC has going for it, I’ve yet to be impressed by a single DC movie. I’m sure I’ll earn allot of hate points for this but I’m not even a fan of the BatBale movies, I’ll spare you the details but basically my feelings on them is “meh no need to watch that again”. Ben Afleck is a decent actor with the right direction and I doubt he’ll do any harm to the movie. I’m more concern with it being directed by Zack Snyder because in my opinion his movies have good visuals but that’s about it. I’m sure plenty of people will disagree with me and that is perfectly fine and you have every right to do so but that just my opinion.
Block IPDelete
Reply

To completely ignore batfleck, I hope that a Batman Beyond movie with Old Bruce played by a now old Micheal Keaton is a possibility.
Block IPDelete
Reply

When I got back to Andrew’s house that night I connected with his wifi, exhaled in a way that felt as if I had been holding my breath for 12 hours and asked Twitter if anything happened while I was gone.
Block IPDelete
Reply 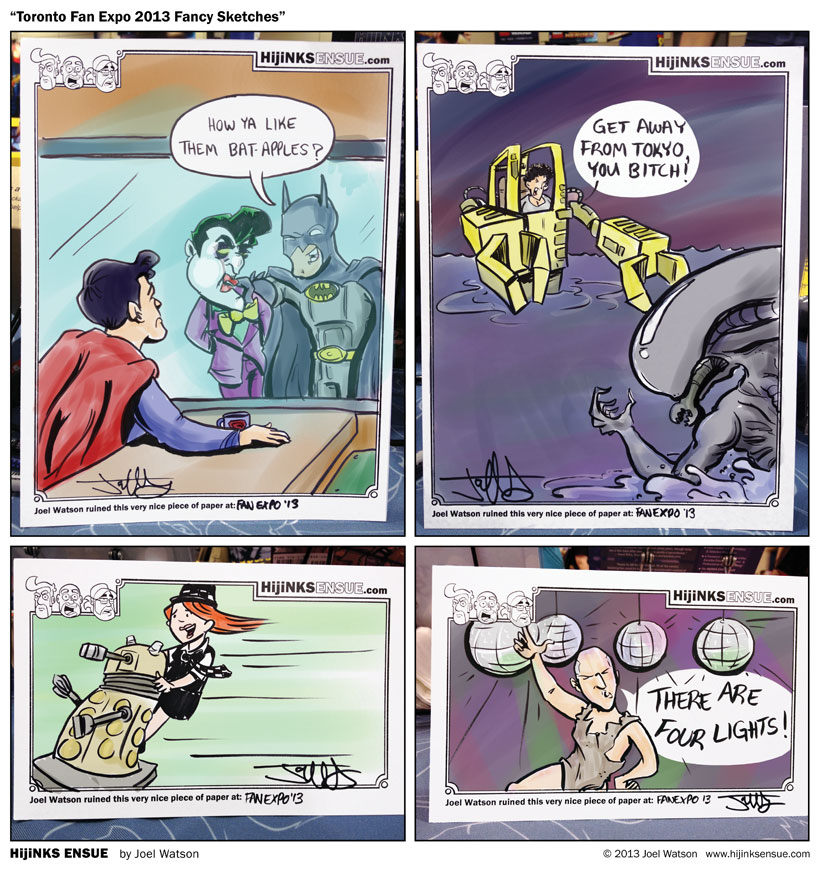 Soory I had a good time in Toronto, eh? I accomplished all of my goals. I attended Fan Expo and spoke to some nice northern Fancy Bastards, I ate 100% of Toronto’s meat supply at Korean Grill House (my actual favorite restaurant in all of the world), I wrote a musical about meat during that meal (much to the chagrin of my co-dining cartoonist friends), and I attended the Banana Bar Crawl (more on that in a second).

Big big thanks to Andrew of I Am ARG and Paul “Leftovers” Westover for hosting me for my Canadian Weekend. Additional thanks to the all the Torontonian(?) Fancy Bastards who came out to say hi and to the Cyanide and Happiness fans that I did sketches for.

Here are a few more things I drew at Fan Expo: A couple of D&D characters, a fractal penis (probably too sexy for work) and a photo comic I made this morning about David Willis on my phone from a plane that was trying to take off.

About that Banana Bar Crawl… I REALLY don’t like bar crawls. I like nice quiet evenings with friends. If we find a good bar with a good atmosphere and a good volume level, I like to stay there until everyone has drank 100 drinks, laughed 1000 laughs and fallen down into a pile on the floor which has to be pushed into the gutter with a large-ish broom. The Cyanide and Happiness fellows have been trying to drag me to the annual Dallas Banana Bar Crawl for years. Since they decided to have on in Toronto, and seeing as how I was trapped there, AND on the condition that they pay for all of my drinks, I agreed to 1) come along and 2) complain a little less.

Guys… oh man, guys… it was a fun time. I stepped out of my comfort zone and partied with my friends and about 200 weirdos in banana suits across 3 or 4 bars in Toronto and I had an amazing time. If you are in Dallas or Toronto and you are not swayed by my words, BE SWAYED AS ALL HELL BY THIS VIDEO EVIDENCE OF FUN TIMES!

COMMENTERS: When was the last time you stepped out of your comfort zone, tried something you thought you’d hate and actually loved it?

Wow, those lightsaber necklaces are cool! Does your wife make them for boys, too?
Block IPDelete
Reply

so were you in a banana?
Block IPDelete
Reply

my costume was accidentally left at the booth. my blessing and my curse.
EditDelete
Reply

Maybe he’s gloating, because Batman’s archenemy can’t carry around a little green rock that turns him into a pussy like Superman’s can?
Block IPDelete
Reply

It’s a reference to Good Will Hunting. (Matt Damon and, most importantly in this case, Ben Affleck were in it and wrote the screenplay.)
Block IPDelete
Reply

Totally agree with tzeentchling. “There are 4 lights!” is brilliant!
Block IPDelete
Reply

Never. My comfort zone is surrounded by cement fortifications and razorwire. The Guards on the towers have sniper rifles and have standing orders to shoot to kill.
Block IPDelete
Reply

Is it just that imagines that restaurant as the one Supes and Bats hang out in in the How It Should Have Ended videos?
Block IPDelete
Reply

I thought so as well. Of course, he wasn’t saying “Because I’m Batman” so maybe not.
Block IPDelete
Reply

Well…I used to be a fairly distant sort and didn’t like being touched.

Then I decided to go to massage school because I wanted to heal people, and it turned out to be a pretty awesome decision.

Hey, I noticed that Hijinks Ensue joined in with other comics like Girls with Slingshots, Eerie Cuties, etc.(through Hiveworks??)
Just wanted you to know that when I click on the Hijinks drawing, the LINK ISN’T WORKING to HijinksEnsue.
Google Chrome message is Oops Google Chrome could not find http. Did you mean Hijinksensue.com (this is a link that connect to your site).

Firefox message is: Firefox can’t find the server at http.