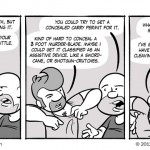 Thanks to Lar, who inspired this comic via a twitter exchange a couple of weeks ago. Lar has some AMAZING prints for sale, including all 11 Doctors as totes adorbs bunnies.

There is a sort of reality distortion field for geeks that tends to envelop them and dampen their higher cognitive functions at events such as ren faires, comic-cons and… places where nerdy things are for sale. The example I always use is the one where you’re at a ren faire and you convince yourself that you REALLY NEEED an 11 foot tall driftwood wizard staff topped with a pewter dragon clutching a power crystal. I mean it’s only $200, and it’s basically one of a kind, and it would look SO BAD ASS propped up in the corner of your apartment between your alabaster Middle Earth chess set and your replica Xena shuriken/Gabrielle bowstaff. It seems like such a fantastic and fiscally responsible idea until you walk back to the parking lot and the reality distortion field fades.

I know some of you are able to get these items home and feel very good about your purchases, but for me they are just buyers remorse waiting to happen. I’ve never allowed myself to purchase something expensive that doesn’t actually do anything. I want to, believe me. I’ve just never had that kind of disposable income, or unclenched long enough to allow myself that kind of indulgence. I’ve had friends who own fantastic movie props, replica swords and lightsabers, hyper realistic costumes, etc but I’ve never been able to partake myself. I met a guy at Comicon San Diego last year that owns the largest private collection of BSG props (including most of the CIC) and I thought “GODS how awesome it must be to come home and be surrounded by that stuff… and FRAK ME that money could have payed so many bills!” I really think he’s the one that has the right idea. Him and the guy with the wizard staff and the lady with $3500 Serenity model with the blinking lights are the ones that know how to have fun.

COMMENTERS: Have you ever made such a purchase? Did you regret it or revel in it? What Bat’leth type item do you covet? I can’t go through those Harry Potter gift catalogs without having to convince myself that I don’t need Voldemort’s wand, a time turner and a golden snitch for my mantle.

A bunch of webcomic creators, including myself, donated items for the World Builders charity auction/lottery. They help families in 3rd world countries to be able to feed and clothe themselves through giving them goats, chickens, cows and such. Read more on Patrick Rothfus’s blog.