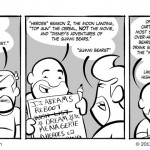 Blind Ferret’s server got hacked, so the HE Store is down for now. Sharksplode is still fully functional.

I did a two part interview with the United We Geek podcast. You can listen to part 1 right here!

Adventures of the Gummi Bears was one of those 80’s shows where someone said (someone in this case being Michael  Eisner), “Hey, here’s a thing kids like. Let’s make a show about it. Doesn’t matter if it’s a food or a packaging material or an intangible idea or paint samples. Just make it all alive and add magic to it!” I always appreciated the lengths cartoon producers would go in the 80’s to make a show somehow appeal more to what they perceived children were. Like with the Punky Brewster cartoon, some guy saw a successful TV show about an orphan girl and her foster father and said, “Great premise, but let’s magic that shit up a notch! Bam! She’s got a fuzzy goblin from another dimension for a pet or whatever! 80’s cartoon producer guy, you’re a GENIUS.”