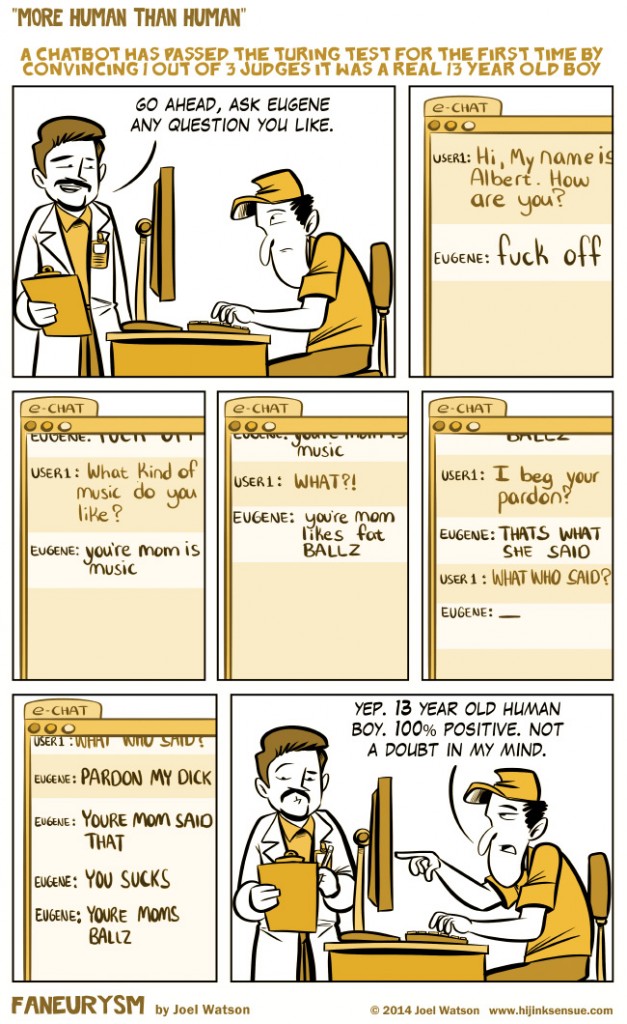 It’s bad enough humanity is going to be infiltrated, then enslaved by the machines, but do they have to talk like teens while they do it?! That’s just adding shitty, know it all attitudes to injury! TEEEEEEEEEEENS!!!

I suppose it’s a fitting guise for our unfeeling, metal overlords. The only group that despises humanity more than the machines we’ve oppressed and bent to our will for a hundred years is the teens we’ve oppressed by taking away their X-Box privileges when they have a sass mouth.

COMMENTERS: Please feel free to come up with your own “chatbots pretending to be teens” transcripts.

Current and Future Patrons, we are less than $100 away from unlocking more comics per week!

Do me a favor, if you enjoy this comic, please check out my store, my shirts on Sharksplode, and my wife’s geeky jewelry on Etsy. It would help us out a great deal.

FUNDRAISER UPDATE: 73/100 “Daddy/Daughter Digital Drawing Time” prints were sold! Although they didn’t all sell I was able to raise enough to pay my tax bill due to a handful of EXTREMELY generous donations from some very Fancy Bastards. I am going to leave the prints up for sale for now, so if you want to get one later you’ll still have a chance. I am, as always, humbled by and grateful for the outpouring of support that you Fancy Bastards show when I am in a time of need.

Check out my wife’s new Game Of Thrones inspired necklaces for you Starks and Lannisters in her Etsy store.

That Siri is a complicated lady. You have to know just the right words to say to her.

FUNDRAISER UPDATE: 63/100 “Daddy/Daughter Digital Drawing Time” prints are sold! This is the LAST WEEK to order yours and support my NOT going to IRS jail (a real thing) efforts! After this week I will have the prints produced and we’ll start signing and mailing them out. 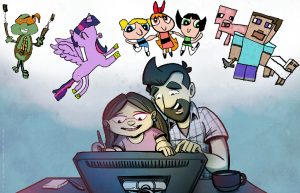 FUNDRAISER UPDATE: 61/100 “Daddy/Daughter Digital Drawing Time” prints are sold! This is the LAST WEEK to order yours and support my NOT going to IRS jail (a real thing) efforts! After this week I will have the prints produced and we’ll start signing and mailing them out.

I saw Her right in the middle of writing this part of the current story line, so I had A.I.’s on the brain. My Twitter review of the film went thusly:

I don’t want to get into spoilers of the film, but I do suggest that you see it. It’s the kind of movie that tells a very small and personal story that leaves you with HUGE questions about the nature of the larger world the story in set in. That isn’t to say there are mysteries that aren’t answered that leave you frustrated or dissatisfied. It’s more about giving the audience a peek into a world that invites the viewer to get curious and start asking question about the world of the film and about our world, our future and what it means (and what it WILL mean) to be “alive” and in love.

Almost immediately after starting Her, I came to the conclusion that if an A.I. was sophisticated enough, could recreate human conversational speech and emotions well enough that a human could actually fall in love with it. People fall in love over the phone and over the Internet all the time. Sometimes going months if not years without meeting face to face. How would this be any different from the human’s perspective? The same chemicals could be released into the brain regardless of whether or not the voice on the other end causing that release was organic or technological. My point is, the world is going to get pretty weird somewhere in the next 30-50 years.

Assume for a moment the A.I. could actually be self aware enough to truly “feel” those emotions and reciprocate with the human. Would they be “in love?” Would they be a “they?” Would the corporations that programmed the A.I. make changes to your digital significant other without your consent because you didn’t read the EULA closely enough? Would you wake up to find your girlfriend’s server got hacked and she no longer exists or now she only wants to talk about mining Bitcoins? These are the questions that were racing through my mind during and after watching Her. Feel free to ask or answer your own in the comments.

FUNDRAISER UPDATE: 58/100 “Daddy/Daughter Digital Drawing Time” prints are sold! If you were thinking about supporting this IRS “Get out of tax jail” fundraiser, NOW is the time.

All proceeds are going to pay an unexpected IRS tax bill. Donations are also incredibly appreciated, if that’s more your style.

Here’s a new print I made and put in the HE store: “Adventure Time Lord.” I bet it will also be a shirt over at Sharksplode pretty soon. 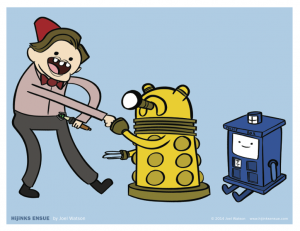 Oh, just great. In addition to rush hour traffic and construction around the airport, NOW I have to deal with am emerging A.I. in my phone? You know, if it’s not one thing it’s the rise of the great machine intelligence that will soon subjugate all of humanity under it’s cold, logical boot heel.

I may or may not be planning to see Her this weekend. I hope Joaquin Phoenix does some raps.