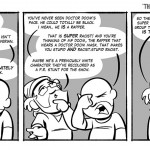 Here’s a Lo-Fi follow up to this comic about perceived racism in the world of spandex clad mighty men.

As a straight white dude, it’s often easy to forget that not everyone sees themselves represented (not accurately, mind you, but REPRESENTED none the less) in every conceivable form of popular media. That isn’t to say I have ever really identified with the muscle bound ab-havers of the various comic book universes, but I imagine it’s even harder to relate for the non-white, non-enpenised, no having-boners-for-the-opposite-sex types of people.

COMMENTERS:  Are there any minority characters in comics, or other nerd media that strike you as particularly accurate portrayals? If you belong to any minority group, was there ever a character in fiction that you identified with in a special way? Ladies, feel free to answer this one too. Even though you’re half of all people, you are still pretty underrepresented in geek pop culture as far as I’m concerned.

Oh good. I was worried this would be more commentary on Marvel using an Irish actress as their prototype for Wanda Maximoff/Scarlet Witch in Avengers. Because using a Caucasian actress for a character who you’d have to look up the wikipedia fictional biography of the father off to know she’s not complete Caucasian is apparently totally racist…
Block IPDelete
Reply

As a fat white male, can we have MORE representation than just Bouncing Boy?
Block IPDelete
Reply

Well, Plastic Man can represent us if he’s in the right mood
Block IPDelete
Reply

Asian dudes do not get a lot of representation in Western media. Seriously, there are only so many John Cho characters I can cosplay as.
Block IPDelete
Reply

You also don’t have any Native Americans really represented *well* at all.
Growing 50 feet tall is just…WTH for?
Block IPDelete
Reply

The answer is Short Round.
Block IPDelete
Reply

Jewish superheroes. Shadowcat is the only one I can think of off the top of my head.
Block IPDelete
Reply

Sabra is Jewish – in fact, she’s the Israeli pseduo-Captain-America.

Well there is Magneto, who is sometimes a villain and sometimes a hero, especially in Marvels many alternate universes(seriously awesome in Age of Apocalypse).
Block IPDelete
Reply

Sherlock’s probably as close as I’m going to get on the Asexual front.
Block IPDelete
Reply

Spider Robinson is one of the few male authors who I’ve ever felt did a decent job at writing women. Also one of the very first, so far as I know, to have an asexual character. I suspect he’s doing a really good job on his black characters too, although not being black I can’t really say. They don’t read as token stereotypes to me, at least, and are just as much rounded people as any other race he might have in there.

Other than that, um… nice to see how well “The Princess Bride” did fencing, although that probably doesn’t count. Still, if you know anything about fencing at all, it was really, really good to see someone FINALLY get it right. Still pretty sure that doesn’t count, though.

Hmm I am not sure I can think of a trans comic book hero my self.
Block IPDelete
Reply 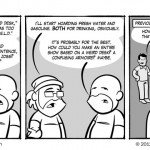 CRUISE FUNDRAISER: 77/100 prints are sold and I only have until Dec 15th (2 days left!) to meet my goal of selling all 100. Help me get on a nerd boat and get some neat art for yourself in the process!

I doubt Joss Whedon is the type to gloat, but I bet he had to be at least a little bit smug when ABC cancelled Weird Desk in favor of S.H.I.E.L.D. “Yeah! Who’s NOT getting cancelled now? Who’s the big, fancy ginger that directed a BILLION DOLLAR MOVIE?!” is probably the type of internal monologue Whedon was running as he gave his deepest, heartfelt condolences to the Weird Desk team. He probably also sent them a fruit basket.

COMMENTERS: The reason cited for canceling development of Weird Desk (seriously… Weird. Desk. Weird Desk? What the entire fuck?) was plot overlap with S.H.I.E.L.D. Those overlapping plot elements could pertain to Weird Desk‘s theme of WEIRD cases coming across a certain DESK (OK, I JUST got that), and be investigated by a team of agents. So is SHIELD basically an X-Filesy, Fringey sort of affair? Do you want a “monster of the week” thing going on in S.H.I.E.L.D or do we want the overarching plot mixed with standalone adventures in an expansive universe and intense character development that we expect from Joss?

Hey hey! You can listen to an interview I did on the Clinically Inane podcast. 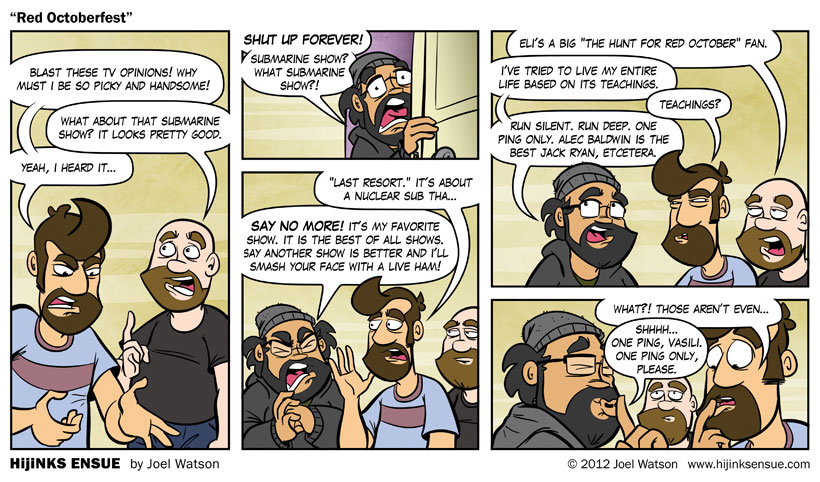 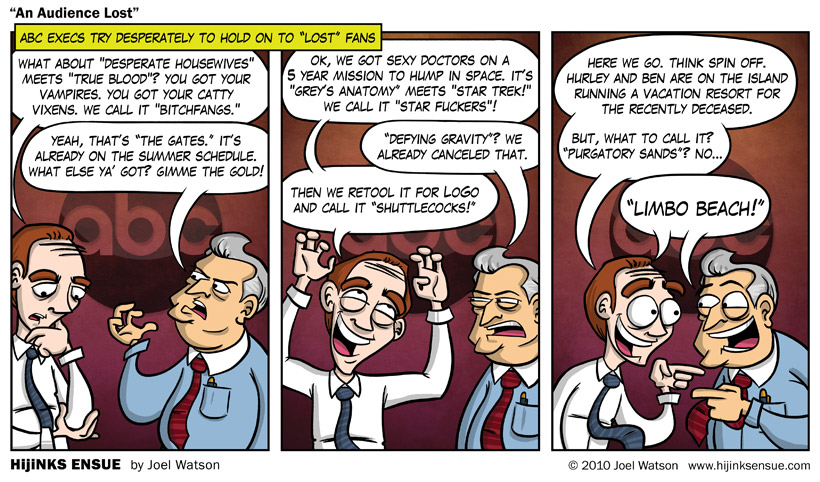