HijiNKS Ensue is a semi-autobiographical comic about a lifelong geek and aspiring artist who turns his back on an unfulfilling, but financially stable career in order to pursue art full time and set a better example for his daughter. It’s created by me, Joel Watson. I say “semi-autobiographical” because the core elements of the stories in HijiNKS ENSUE are true: I DID start a comic in order to show my newborn daughter that life was more about creating art and happiness and less about creating wealth (read more about that in “The Experiment”), and I DID get fired from my job for completely losing interest in it once my comic starting taking off, and most of the characters ARE based on and named after my family and friends, but most of the specifics are at least 50% fictional in order to make things more interesting.

As a sci-fi, movie and comics geek, Joel has extremely specific, and intense opinions about things that most people would consider unimportant. These opinions range from “the correct order in which to rank Star Trek captains from Best to Janeway” to “still being mad about the LOST finale” all the way to “still being mad about the Battlestar Galactica finale.” The other thing Joel geeks out about is being a dad. He tries to share his love of geekery with his 6 year old daughter, Gracie, without being too pushy or opinion-y (which can be hard for him at… basically ALL times). He’s trying to strike a balance between showing his little geek-in-training what he loves, while allowing her the room to discover and explore what she loves. He’s also still REALLY mad about LOST. That one’s just going to take time. Joel’s hope is that by staying professionally unemployed as an artist for as long as possible he’ll be able to teach his daughter, by example, how to always follow her passion and never settle for anything but happiness.

Gracie is 6 years old. She’s doesn’t remember when she was a baby and both her parents were miserable at their high paying, hectic, life consuming jobs. All she knows is that Daddy stays home and draws pictures for people, while Mommy stays home and takes care of her and Daddy… and has a photo editing business… and sells handmade geeky jewelry… and… more about Mommy later. She doesn’t know that her situation is uncommon, and doesn’t like it when Daddy has to leave one weekend a month to go to comic conventions. She likes to draw pictures, sing, make crafts and ride her bike, and she can’t understand why her parents are always staring at her with those big, goofy grins on her faces while she does those things. When she grows up she either wants to be an artist, or a doctor, or a scientist or a veterinarian or an astronaut or a puppy or a…

Emily and Joel started dating when they were 18 and Joel was living (illegally) in the dorms at her school. They met as kids and since then have grown up together. They were poor, they were rich and they were poor again, but they were always on the same page. They were, and are each other’s best friend and biggest fan, and together they’re an unstoppable team. Emily took the first 5 years of Gracie’s life off from work to be a full time mom. Now that Gracie’s in school, and having gotten used to the “bossless” lifestyle herself, she is starting her own experiment at self employment.

Josh and Joel met when Joel was living (again… illegally) in the dorms at Josh and Emily’s school. Josh was a CS major but quickly dropped out after he was hired by a video game developer who was impressed by his extracurricular Half Life mods. Josh is gainfully employed, unmarried, childless and subsequently hemorrhaging disposable income which he likes to spend on Apple products, breakfast cereal flavored alcohols, backing ridiculously ambitious Kickstarters and wooing the burliest and BEARiest of dudes.

Eli is a freelance game developer, 3D artist and semi-professional beer enthusiast. Sometimes he works for a big company, sometimes he works from home and sometimes he has a few months here and there to do nothing but watch B-horror movies… C-horror… is there a P-horror? What’s the worst letter of the alphabet? Q? Eli is from the part of Texas that is essentially Mexico, in that it is literally 100 feet from Mexico. Growing up he didn’t so much have G.I. Joe and Transformers as he had “G.I. That Might Be Spider-Man’s Head On Mister T’s body” and “Trans-Don’t Buy Tacos From That Taco Truck Because They Only Sell Weed.”

Denise immigrated from the Philippines when she was a child. Only having been exposed to a few select American TV shows, like American Gladiators, she thought the USA was a vast gauntlet ruled by muscular, spandex-clad warriors who shot tennis balls at trespassers. She and Eli have been married for a few years, but find they still quite like each other. She works as a chef at a gastropub, but she and Eli have plans for an experiment of their own. 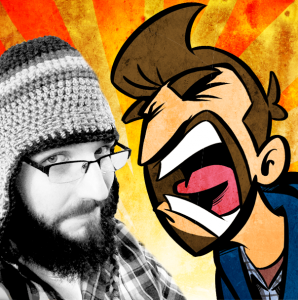 I’m Joel Watson. I live in a suburb of a suburb of Dallas, TX with my wife, daughter and two cats, Tivo and Replay. I’ve been professionally unemployed as a full time artist since 2008. Since 2007, I’ve been creating the online comic HijiNKS ENSUE, which is ending in 2016. From 2008 to 2012, I hosted The HijiNKS ENSUE Podcast and I currently co-host a podcast about Harry Potter with my 8 year old daughter. I am also a voice actor and writer for The Cyanide & Happines Show and the weekly Explosm animated shorts. I travel to a half-dozen or so comic conventions each year, and once I took a shot of maple bacon tequila out of a Cadbury Creme Egg. I called it a “Sadbury Egg.” It was delicious.