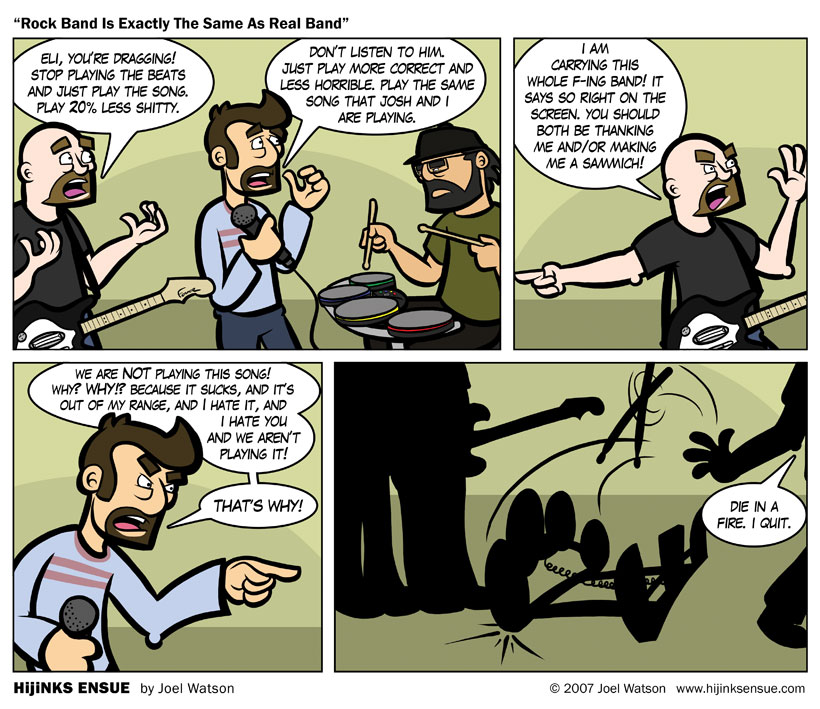 I repeat, this is NOT a gaming comic. That said, here’s a comic about video games.

Josh picked up Rock Band on launch day and by 5am the following morning he was #270 on the Live leaderboard. 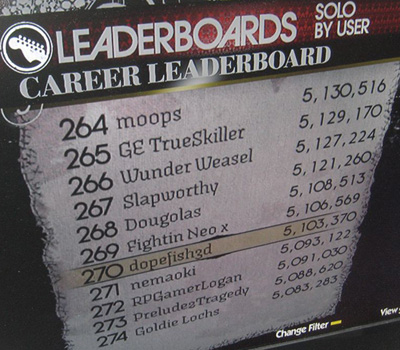 The following weekend I swung by to see what all the fuss was about. Josh was teeming with excitement at the chance of fulfilling his group-gaming/musical orgy fantasy. (This part is so great. Seriously, just wait for it). Let me re-emphasize his anticipation and excitement. It was palpable. So he sets up the drums and I open the mic from it’s original packaging. Guitar in hand he opens the cabinet that houses his 360 and leaves the room (for some reason). I’m holding the mic and thinking to myself, “I can scream RED RING! RED RING! or I can let events unfold naturally.” I choose the more passive path. It’s easier to drink in the ruination of a man when you know it’s coming.

A blinking red beacon, like a reverse lighthouse to hell steered Josh towards his impending anguish. The Red Ring of Death. The timing was poetic. Waves of sadness rippled in concentric rings through the floor boards at his feet. I just cracked a smile. I wouldn’t be playing Rock Band this day, but it’s not that often you get to watch someone’s spirits get deconstructed. I was sufficiently entertained.

He still blames the whole affair on me. As if my mere presence shaped the outcome of events. I contend that his “Launch Day” 360 was on borrowed time as it was and possessed its own warped sense of humor. The absolute best part was his attempt to save the situation. He runs to the bathroom and comes back producing a towel and wrapping, nay, swaddling his ailing Xbox in it. “Does it have to get its ass to Mars?” I asked.

We eventually got together and rocked out (on Josh’s NEW Xbox). The above panels are more historical record than clever conjecture. The drums particularly frustrated Eli, an actual drummer, in that the game requested beats that would be incorrect were they played on real drums.

I play both guitar and (some)drums in real life but I’m for shit when it comes to either controller in Rock Band. However, I found the whole vocal experience to be excellent. It was just an outstanding amount of fun. Being able to correct your pitch in real time with on screen feedback made it a perfect vocal tutor. I managed to pull off a 94% or so on “Welcome Home” but the Xbox actually threw beer bottles at us when we tried “Tom Sawyer.” It looked disappointed.